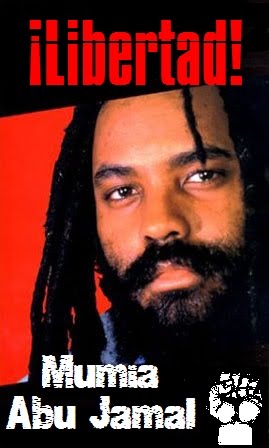 “It takes many to make revolution… and many to preserve it.”

“About the idea of organizing outside of political parties and the political class —I’m with it. In fact, it may be the only thing that keeps social movements fresh and free from the snares of political corruption.”
Gloria Muñoz Ramírez

A year ago we began trying to arrange an interview with Mumia, one of the best known political prisoners in the world. We sent him letters and requests through all available contacts (including Amigos de Mumia of Mexico) who kindly offered to help get in touch with him on death row in the prison at Waynesburg, Pennsylvania, the state where he’s been imprisoned for 29 years. One fine day an envelope appeared beneath our door with the name of M. A. Jamal as the sender. This is the first interview the African-American activist and ex Black Panther has given to a Mexican news media.

In a two-page, typewritten letter, Mumia speaks of the need for social organization; of political parties as “servants of capital”; of the relevance of autonomous movements and the proposals of the EZLN; of the African-American movement in the United States; of the teachings of Franz Fanon; and of the expectations aroused by Obama when he became President in a country where “Blacks hold offices but have little power.”

The way Mumia sees it, “the struggle continues.”
The interview with Mumia follows in the format of his choice:

Hola! I’ll try to address some of your concerns in this format. Here we go!

There is no single, one way nor one event that sparks such things. Because people are complex, and, of course, conditions change. Organizing begins, according to the great C.L.R. James, when 2 people agree to work together. Mao said that ‘a single spark can start a prairie fire’, and that certainly seems to be the case when you look at Egypt and Tunisia of the past few weeks. But it’s also true that organizing has been talking place (especially in Egypt) for some time now, and it appears many people just reached a breaking point.

Many, indeed, most political parties, especially in the metropolis, have become open servants of capital, and thus compete, not even pretending to represent the people, but in service to Weath. The French historian De Tocqueville famously said,

“Than politics the American citizen knows no higher profession – for it is the most lucrative.” He wrote this over 150 years ago!

They are actually impediments to the needs and the interests of the people. This is especially clear in the so-called developed world, where we see politicians promise one thing to get elected and then, once in office renege on the very things they promised. They never fall, however, to service their “friends” on Wall St., or in The City, or of the Bourse. They get the lion’s share – of the people’s wealth!

If I understand what you are saying (there being little autonomous movements in the US), you mean movements which are ‘autonomous’ of political parties. If that understanding is correct, than I’m all for it. Political parties, in addition to being mechanisms to amass personal wealth, are machines to give people the illusion of democracy.

I’m with that. In fact, that may the only thing that keeps social movements fresh from the snares of corruption that is so common in political life around the world. An older friend and I have been discussing this very thing for several years now (he too, is a student of the EZLN). I think it should be explored, tried out, and then utilized if it can be done.

The situation, to be quite honest, is quite dire. For millions of children in US ghettoes, in cities all across America, the drop-out rate is 50%. In some cities, like Baltimore, I’m told that the figure approaches 75%. And even for those that graduate, many of them are unable to enter college, because they’ve received a substandard education. That’s for children! While the official unemployment rate is about 7% nationally, In Black America it is nearer to 35% – and 60%+ for young people! In addition, young Blacks are subject to police violence that is overt, brutal and deadly – and rarely are they punished for such acts.

The Obama election has awakened and emboldened rightwing, racist forces, many of whom have found a home in the so-called ‘Tea Party’ movement. Politicians now speak openly in praise of the Civil War (1860-1865), on behalf of the South. Indeed, several days ago, the governor of Mississippi was set to honour one of the founders of the Ku Klux Klan with a license plate: Gen. Nathan Bedford Forrest, who was responsible for the torture and massacres of hundreds of Black Union soldiers at a piece called Fort Pillow.

That movement has significant interest among the Black young, but few know historical details. That’s because they are told by teachers and media of the Civil Rights triumph that enabled the elections of Black politicians. The nationalist movement is at an ebb. What the movement accomplished was the separation of working class Blacks from bourgeois-oriented Blacks, and the resultant alienation of the well-to-do Blacks from their poorer, inner city cousins. This is reflected at almost every level of Black life in America. That explains how (and why) schools for millions of Black and Latin@ kids can be so poor, in so many communities.

The differences are real, for we rarely share living space (most indigenous communities are in rural or Western areas; most Blacks live in urban areas). That said, there is certainly ideological interaction between the two, as the AIM was clearly influenced by the BPP, and the Black power movement. The struggles for independence and freedom reinforced and influenced each other.

As capitalism reaches a crisis, it forces people to think less holistically, and more selfishly. This Impulse, stoked by fear (and spread by corporate media) reinforces the feeling of separation among people, and dissipates commonality, community and indeed, social cohesiveness. Unless activists can build that feeling of solidarity among peoples, these impulses will lead to real social and perhaps historical disasters.

EZLN  and the Black Panther Party

I think what unites both formations is (was) the insistence that people, from all walks of life, can play important roles in social movements of change. Many Black Nationalist movements of the ’60s were quite critical of the BPP for working with white people (it also worked with Chicanos, Puerto Ricans, Japanese, and Chinese activists). The Zapatista call has always been to the world: the entire world, of colour, of gender, of class, etc. I think that inclusive quality is, at base, its most humanistic, and that which appeals to the broad stretch of the human family. For it takes many to make revolution – and many to preserve it.

Contradictions between discourse and practice in the United States

Your reading of contradictions between the US as an avatar of human rights end being the Prison house of nations is perceptive. That contradiction is stark, and irrefutable. We have many things in America, but democracy certainly isn’t one of them. We have democratic forms; but no true democratic norms. When millions of Americans took to the streets in the Spring of 2002, demanding that the US not go to war, the ‘democracy’ ignored the people – and the result has been a social, humanitarian, ecological, archaeological and military disaster. George Bush called the millions in the streets a ‘pressure group’ – that he promptly ignored. How is it that the country that speaks so sweetly of freedom has more prisoners than any other nation in the world-and most of them are Black? The U.S. has about 5% of the world’s population – yet almost 25% of the world’s prisoners. So much for human rights.

African-Americans didn’t take power in the Obama election, although I can understand why some think they did. That’s because a certain kind of history was made. For the first time in U.S. history, a Black person was elected president (interesting, it comes almost a century and a ½ after a Black man became president of Mexico!). But, as Fanon taught in the African continental context, colonialism was succeeded by neo-colonialism. Blacks hold offices, but, the truth of the matter is, they hold little power. They are beholden to the same interests as white politicians are. Indeed, the sad fact is, Blacks may hold less power than before, for Black politicians are less able to address Black issues, for fear of being projected by the corporate media as ‘racist’ (recall the example of when Obama called the cop who harassed and arrested his friend and old college professor, Henry Louis Gates, Jr., ‘stupid’). The media went crazy. The incident proved also that the Black ‘elite’ (if a Harvard prof. isn’t elite, no one is), Prof. Gates was treated like a poor Black in the ghetto, arrested in his own home, humiliated, and jailed for daring to speak boldly to a white cop. The media rode Obama into silence.

As the Mozambicans used to say, ‘a luta continua’: the struggle continues. We must build and widen, and deepen and strengthen our struggle, wherever it is, for, to quote Frederick Douglass, “Without struggle there is no progress.” It may not be easy; but it is necessary.