‘We Still Fight, But With Words, No Longer With Guns’ 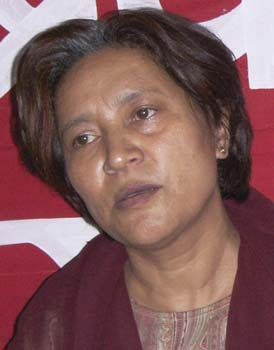 50-year-old Hisila Yami alias Comrade Parvati, Nepal’s most powerful woman Maoist leader, dispells the myth that Maoist guerillas are bellicose and unkempt. She is suave, soft-spoken and smiles often. Educated in India and England, this architect taught in a college for 13 years before going underground during the Maoists’ 11-year-long armed struggle. From guerilla camps to becoming Minister for Tourism to being elected to Nepal’s Constituent Assembly, Hisila has had a long and eventful journey. Despite being a political heavyweight — a Member of the Politburo of the Unified Communist Party of Nepal-Maoist (CPNM), a former Minister and wife of Baburam Bhattarai, the ideological fount of the CPN-M — Hisila wears her identity lightly.

In a smart business suit, a salt-andpepper- haired Hisila spoke to AMRITA NANDY-JOSHI of the Nepali Maoists’ transition from revolution to realpolitik, from military offensives to political offensives and the roadblocks faced in between.


Despite years of a violent war, what brought the Maoists victory in Nepal’s Constituent Assembly elections?
Our armed struggle was a people’s war. The people of Nepal had grown intolerant of a corrupt and inefficient government. The monarch and other non-left parties have promoted and taken advantage of the dominant Hindu belief systems. With the Army supporting and protecting monarchy and imperialism, people eventually saw who stood for what. The CPN-M declared total war against these forces. We had even thought of taking over Kathmandu but we realized that this would not be appropriate. Besides, we knew how India and China would have responded.

Meanwhile, the Maoists gained popularity and our strategy gained momentum because we delivered what the government could not. For example, justice was Kathmandu-centric and archaic. So we appointed two legal officers, a man and a woman, to every district. We started a crude banking system and cottage industries as well. We almost ran a parallel government. People knew and appreciated our values of egalitarianism.

How difficult is it for Maoists to deal with realpolitik?
Entering a multi-party parliamentary democracy system is certainly a departure from certain models of communist revolution. Yet, in another way, war and democracy have a dialectical relationship.

Nepal has a rich leftist tradition and movement, with many shades of red. We have fully used this to our advantage to enter the peace process. We are following the Comprehensive Peace Agreement (CPA), a timetable for the Maoists to enter Parliament, lay down arms, join the Government and participate in the electoral process.

At the Constituent Assembly (CA) meetings, I watch our cadre members and am amazed at how quickly they have learnt the ropes. Yet, the struggle is on. We fight now with words and not with guns – we argue over the expressions to be used in drafting the Constitution (smiles).

What roadblocks are causing the current stalemate?
Our strongest opposition is from the military because their supremacy is challenged in a parliamentary democracy. They enjoyed impunity under the monarchy and do not like us for our egalitarian ideals and the idea of civilian supremacy. Other non-Marxist parties such as the Nepali Congress, too, see the military as their last saviour, and so cling to each other and to imperialist agents.

The Comprehensive Peace Process clearly states that the cadres of the People’s Liberation Army will be integrated into the Nepal Army. The Army Chief has overruled this. Since the army’s loyalties to the monarchy are well known, we suggested that the terms of generals not be extended. In fact, new officers were recruited to the top echelons of the police and paramilitary forces. We faced no opposition. Yet, when it came to the Army, the same idea became untenable. We are keen to end the impasse and want to be flexible but our flexibility is not absolute.

Is there democracy within the party?
Internal democracy in the CPN-M is very strong. Prachanda encourages diversity of ideas but has the knack of keeping the team together. There are some who do not agree with our struggle within the parliamentary framework. There are contradictions, old and new. Yet, we are all firm that we will not let realpolitik overcome our people-oriented agenda.

Have you left the path of armed struggle for good?
We have given up violence for the time being. In fact, we want to integrate our People’s Liberation Army into the Nepal Army so that our boys receive good training. To us, this was part of a restructuring exercise. The Army is rather feudal and is resisting this.

If the peace process is long, some cadres may leave us. Some of them have joined the Terai movement. Even within our party, some want to go back to the path of revolution. A philosophical churning is on, not just within our party but within other parties as well.

In other South Asian countries, federal decentralisation has defeated the collective spirit. How will you ensure you don’t repeat the mistake?
Federalism helps reach out to every person in a parliamentary democracy. We are discussing this at the CA and are proposing 15 states to accommodate all communities. Religious and ethnic conflicts happen in Nepal as well. In the Terai, there have been clashes between Hindus and Muslims but things do not flare up like they do in India.

As Maoists, however, we believe that as economic development takes over, religious and ethnic sentiments will wither away. All three regions of Nepal have to be economically viable and integrated in order to keep conflict at bay. There will have to be an inch-by-inch adjustment.

In the name of culture, religious and ethnic issues can take the stage. By ensuring that that workers and peasants have representation within ethnic groups, we hope to resolve ethnic and class conflicts.

When we went to war in 1996, our agenda was a new, democratic revolution. This stage — the peace process — is penultimate. The goal is still the total restructuring of the state.

It is momentous to be part of a country’s constitution- making exercise. How are you ensuring that it is progressive, particularly with regard to women?
We have been preparing for this moment for a long time. Women are part of all CA sub-committees on planning and development. There are several young women from the dailt, sherpa, madhesi and Muslim communities representing different political parties. They are planning land reforms while keeping the interests of women, dalits and other marginalised groups in mind. Inheritance rights will be re-looked at. The sub-committee will recommend that inheritance take place in the name of the mother, daughter and so on.

As per a Supreme Court ruling, the ‘third sex’ will be a recognised category of sexual identity. Our forms and other papers should soon have a box with ‘third sex’, besides the usual ‘man’ and ‘woman’ options. Nepal’s society is quite liberal about sexual identities and orientation. The left, in particular, is tolerant towards these issues. In fact, Sunil Pant is Nepal’s first openly gay Member of Parliament.

Yet, women’s struggle against patriarchy will be long and hard. When my name was to be registered for elections to the CA, the officials assumed that I use my husband’s name and registered me as Hisila Yami Bhattarai!

At this juncture, what role do you expect India to play in Nepal?
India’s role should be mature. During the debate over Army Chief Katawal’s unconstitutional response, India supported him and pressurised us to give in to an Army that has always supported the monarchy and been status quoist.

The Indian government has declared the CPI (Maoist) as terrorists and has banned them. What is your reaction? Do you have any links to them?
Banning the outfit will not help. Economic issues should be dealt with through economic measures. The Indian Maoist parties concentrate on their own work. We focus on ours. We do sympathise with them.