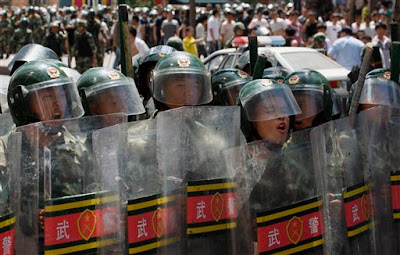 In China, thousands of government forces have swept into a restive city in the Xinjiang region amidst the country’s worst ethnic violence in decades. Tensions have flared in the city of Urumqi between China’s ethnic Han Chinese and the ethnic Uyghurs, a Muslim minority. Some 156 people have been killed, more than 1,000 wounded and more than 1400 arrested so far. Both sides blame the other for the violence. Chinese President Hu Jintao has cut short a visit to Italy for the G8 summit, which opens in Italy today
Some three-quarters of the victims of the violence in China's western Xinjiang region were ethnic Han Chinese, the official death toll shows.

Of 184 people known to have died, 137 were Han Chinese, 46 were from the indigenous Uighur community and one was an ethnic Hui, local officials said.

Correspondents say some Uighurs believe their own death toll was much higher.

"I've heard that more than 100 Uighurs have died but nobody wants to talk about it in public," one Uighur man in Urumqi who did not want to give his name told the Associated Press news agency.

Uighurs living in exile outside China have also disputed the Chinese figures. Rebiya Kadeer, the US-based head of the World Uighur Congress, said she believed about 500 people had died.

According to the Chinese death toll released by state media, 26 of the 137 Han Chinese victims were female, while all but one of the 45 Uighurs killed were male.

The single death recorded in the Hui community, which is similar to the Uighurs ethnically and religiously, was that of a male.
Posted by nickglais on 7/08/2009 01:02:00 PM