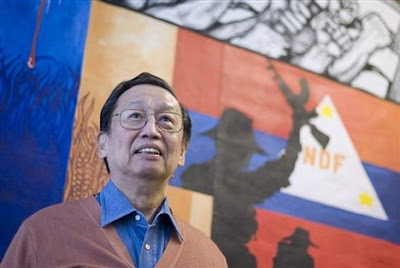 In view of the public statements by certain officials of the Manila government, we wish to set the record straight on certain issues mutually agreed upon by representatives of the Government of the Republic of the Philippines (GRP) and the National Democratic Front of the Philippines (NDFP) for the possible resumption of the formal talks in the GRP-NDFP peace negotiations, during the informal meeting held on 15 June 2009 in the presence of the Third Party Facilitator, the Royal Norwegian Government (RNG).

1.The two Parties agreed to reaffirm all previously signed agreements, including the Hague Joint Declaration, the Joint Agreement on the Formation, Sequence and Operationalization of the Reciprocal Working Committees (RWC Agreement), the Joint Agreement on Safety and Immunity Guarantees (JASIG), the Comprehensive Agreement on Respect for Human Rights and International Humanitarian Law (CARHRIHL) before the proposed dates for the resumption of the formal talks in the GRP-NDFP peace negotiations.

In this regard, the GRP unilaterally declared its intention to "lift the suspension" of the JASIG and cause the release of detained consultants and other JASIG-protected persons, as well as the political prisoners scheduled to be released as early as 2001 and 2004. During the four-hour discussions, there was no mention made by representatives of both Parties that the NDFP would reveal the identities of its list of 87 (not 97) holders of Documents of Identification.


2.For the information of everyone, the NDFP has never demanded from the GRP since August 2002 that the latter ask the governments of the European Union and the US to remove the Communist Party of the Philippines (CPP), New People's Army (NPA) and Prof. Jose Maria Sison, the Chief Political Consultant of the NDFP in the peace negotiations, from the "terrorist list" of these governments.

What the NDFP has been proposing to the GRP is that the two Parties sign a joint statement asserting the right of the Filipino people to national sovereignty and territorial integrity over incidents occurring in the Philippines. Foreign governments have no right to label as terrorism what are deemed as acts of belligerency in a civil war under international law and what the revolutionaries themselves deem as acts of revolution and by the local reactionaries as acts of rebellion under the Hernandez political offense doctrine of the Supreme Court.


3.The RWC Agreement (and its Supplemental Agreement of 17 March 1997) clearly stipulates that the End of Hostilities and Disposition of Forces is the last item in sequential order of the four-point agenda of the GPP-NDFP peace negotiations as follows:

1) respect for human rights and international humanitarian law;
2) social and economic reforms;
3) political and constitutional reforms; and,
4) end of hostilities and disposition of forces.

During the 15 June 2009 informal meeting, what was mutually agreed upon to be part of the agenda in the resumption of the formal talks in August 2009 was the convening of the Reciprocal Working Committees on Social and Economic Reforms of both Parties to work out the tentative agreement on this item and the possible formation of working groups (not yet the Reciprocal Working Committees) on political and constitutional reforms and the end of hostilities and disposition of forces.