Lalgarh on the boil, Maoists resurfacing 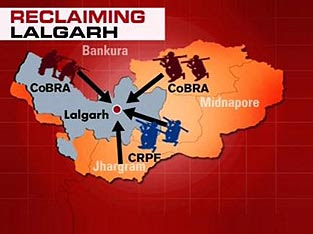 July 20: Lalgarh and the adjoining tribal belt in West Midnapore are once again on the boil. Over a month after the drive launched by the West Bengal government to drive the Maoists out, and contrary to chief minister Buddhadeb Bhattacharjee’s claims, the rebels have begun to "resurface".

A landmine blast at Bakishole was followed by a fierce gunbattle between Maoists and the security forces near Ramgarh. The road between Dherua and Lalgarh was dug up. The police lathi-(a 6 to 8-foot long cane tipped with an optional metal blunt - from the British days! - Ed) charged tribals after members of the People’s Committee against Police Atrocities gathered near the police camp at Gohomi-danga High School Monday morning, demanding its "immediate removal". Twelve people, including some women and children, had to be hospitalised. Hours later, state home secretary Ardhendu Sen apologised for the lathicharge and said all police camps would be shifted out of school buildings by the end of July.

Asked about the Maoists’ "rejuvenation" despite the "success" of Operation Lalgarh, Mr Sen said: "It is a long process. The operation will continue."

As the 10 am Monday deadline for the police to vacate the school camp neared, nearly 6,000 people gathered there, with schoolchildren in the front row, followed by women in the second tier and men at the back. When the police saw the situation getting out of control, the lathicharge began, in which children and women were not spared. Teargas shells were fired as well, injuring a dozen people.
Posted by nickglais on 7/21/2009 12:25:00 PM