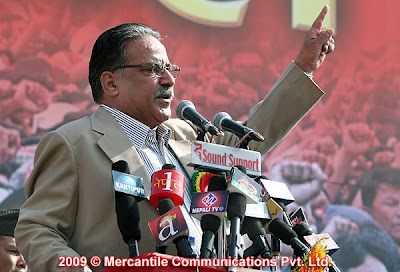 Dahal’s revised dossier stresses on drafting a new “people’s oriented” constitution in order to establish “People’s Republic” and taking the peace process to a desired conclusion.

The meeting concluded that to draft such a constitution, a Maoist-led national unity government which upholds civilian supremacy is necessary. For this the party will forge “a new level of unity among like minded democratic, communist, nationalists and republican parties or forces”, according to Dahal’s document.

It further states that the Maoists will lead a revolt against the system if there are conspiracies not to allow the new constitution to be written in a manner that will eventually pave the way for establishing “People’s Republic” in the country.

The CC meeting also endorsed the secretariat meeting’s proposal of adopting multi-post leadership - of having a seven member secretariat committee - immediately by amending the party statute
Posted by nickglais on 7/31/2009 12:21:00 PM