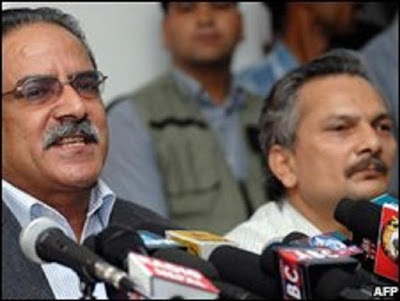 Democracy and Class Struggle says the Common Programme of the CPN Maoist the minimum programme for democratic progress in Nepal appears to be rejected by the "Unholy Alliance".

It is now time for the People to take command again through the mass movement and not let the democratic momentum subside.

It is time for protacted exposure of the Nepali Congress, UML, MJF Alliance at the political level. They must be confronted with the Peoples Mandate for change.

The CPN Maoist is not a Guesdeist* Party with absolute rejection of participation in Constitutional politics but neither is it a party trapped by bourgeois politics.

It has broken the mould of Nepalese politics before - now it needs to do it again.