YPG Official: Turkey’s Target in Syria are the Kurds, not ISIS 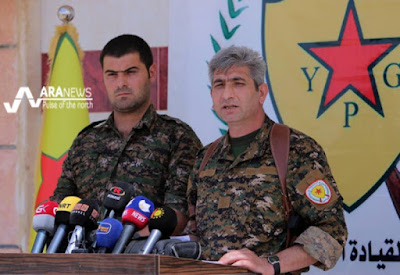 In a new message to Turkey, spokesman of the Kurdish YPG forces, Redur Xelil, said Friday that no one should make excuses to attack headquarters of the Syrian Democratic Forces (SDF) west of the Euphrates.

The Turkish army on Friday attacked the Kurdish-led SDF forces with artillery shelling, after the SDF-linked Jarabulus Military Council took the villages of Amarinah, Magara and Babalah north of Manbij and around seven kilometers from Jarabulus in northern Syria.

Turkey accused the YPG of using the SDF-label in order to take more territory, according to the Turkish state news agency Anadolu.

Xelil suggested that Turkey should not attack the SDF forces under the pretext of hitting YPG.

“Our forces have withdrawn from those areas and giving their support to the Manbij Military Council after the city was liberated [from ISIS],” the YPG spokesman said.

“Any attack against Manbij would be an attack against the people and the Military and Civilian Council of Manbij which is formed by their citizens and have the right to manage the issues of their region and protect it,” he said.

The US coalition is increasingly worried about the tensions between the two competing forces.

Pentagon spokesman Peter Cook told reporters on Thursday that the Manbij operation is not over yet.

“Again, Manbij is not complete. There are forces that are still taking out pockets of resistance.
There’s been a movement as appropriate back east of the Euphrates, and we have every reason to believe that that will continue,” he said.

However, Cook did not refer to the clashes between Kurdish-led forces and Turkey-backed rebels near Jarabulus, while local officials suggested that the Turkish statements that they are against any de facto ‘Kurdish state in Syria’ clearly indicates that Turkey’s target is the Kurds, and not ISIS.

“We are in, obviously, close communications with all of our partners on the ground involved in the fight against ISIL [ISIS], including Turkey and our partners in Syria,” he said. “And this effort so far has been focused on ISIL.”