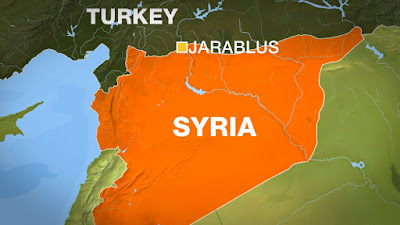 US officials, including Vice President Joe Biden, have declared their support for the operation and called on the YPG to return to the east of the Euphrates.

Aldar Xelil, another influential Kurdish politician, accused Turkey of initiating an occupation of Syria, saying the operation amounted to “a declaration of war” on the autonomous administration set up by Kurdish groups in northern Syria in 2011.

Saleh Muslim, head of the Syrian Kurdish Democratic Union Party (PYD), warned that the Turkish forces would get bogged down in a quagmire and ultimately be defeated.

Speaking to ANFNews, Muslim said that Turkey had gone from targeting Syrian Kurds through proxies to directly fighting Kurdish fighters in Syria on the ground, adding that while Turkey had made the decision to enter Syria, withdrawing would not be as simple.

The PYD believes that Turkey has launched its operation to prevent the Kurds from retaking it from IS, Salam Ali, PYD’s representative in Moscow, told RIA Novosti.

“Jarablus is located in the north of Kobani area and our forces advanced close to it. After the Kurdish troops took the city of Manbij we had plans to go in that direction.

hApparently Turkey invaded from the North not to let the Kurds have this city,” he said.

The Syrian Kurdish militia YPG attempted to retake Jarablus last year, but were reportedly prevented from doing so when Ankara threatened to intervene.

In the meantime, the Kurdish Firat news agency (ANFNews) reported that 29 civilians have been killed by the advancing Turkish and allied troops so far. Some 3,000 ethnic Kurds have reportedly fled Jarablus and its neighboring areas since the Turkish operation became imminent.

The Kurds object to the operation, believing it to be a ploy to prevent Kurdish militias from retaking the town.

Turkish tank units have entered Syria as part of a military operation backed by Turkish and US-led coalition warplanes to clear the Islamic State of Iraq and the Levant (ISIL) group from the Syrian border town of Jarablus, according to Turkish state media.

"The operation, which began at around 4am local time (01:00 GMT), is aimed at clearing the Turkish borders of terrorist groups, helping to enhance border security and supporting the territorial integrity of Syria," Anadolu Agency quoted Turkish officials as saying on Wednesday.

Turkish media said the operation involved artillery and rocket shelling as well as warplanes early in the morning, before the ground forces, including heavy armoured vehicles, entered Syria towards noon.

The operation is targeting ISIL and Syrian Kurdish fighters in northern Syria to end attacks on Turkey's border, President Tayyip Erdogan said in a speech in the capital Ankara on Wednesday.
How is Turkey dealing with threat from Syria?

"At 4:00 this morning, operations started in the north of Syria against terror groups which constantly threaten our country, like Daesh [the Arabic acronym for ISIL] and the PYD [the Syrian Kurdish group]," he said in a speech in Ankara.

Turkey had pledged on Monday to "completely cleanse" ISIL fighters from its border region after a suicide bomber suspected of links to the group killed 54 people at a Kurdish wedding in the southeastern city of Gaziantep.

Turkey is also concerned about the growing influence of Syrian Kurdish groups along its border, where they have captured large expanses of territory since the start of the Syrian war in 2011.
Turkey sees them as tied to the PKK, which has been waging an armed campaign mainly in the country's southeast.

"It is hard to conduct this operation without the green light from Moscow, Tehran, Damascus and Washington," Metin Gurcan, security analyst, told Al Jazeera from Istanbul.

"The open objective in this operation is that Turkey is trying to create an ISIL-free humanitarian zone by clearing Jarablus for possible flow of refugees," he said.

"The covert objective is another one.

The military operation against ISIL comes as Syrian rebels, backed by Turkey, also say they are in the final stages of preparing an assault from Turkish territory on Jarablus, aiming to pre-empt a potential attempt by Syrian Kurdish forces of PYD to take it.

The PYD, a critical part of the US-backed campaign against ISIL, took near-complete control of Hasaka city on Tuesday.

The group already controls chunks of northern Syria where Kurdish groups have established de facto autonomy since the start of the Syria war - a development that has alarmed Turkey.