EXPOSE THE FALSE INDEPENDENCE OF 1947, OPPOSE STATE REPRESSION AND BUILD ORGANIZED DEMOCRATIC MOVEMENTS .EMULATE THE EXAMPLE OF CHINA UNDER MAO. 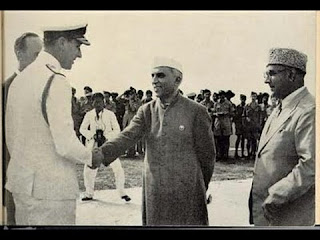 The entire nation is celebrating independence day today forgetting the repression taking place on minorities,dalits,intellectuals,workers and peasants and the fact that it was morally only a transfer of power.

People are not educated about the ambiguous role played by Gandhi,Nehru and Sardar Patel and sadly many are jumping to the bandwagon of Narendra Modi.

Today the tentacles of Hindutva fascism and repression of peoples movements by globalization have reached their highest zenith.

Whether it is on the tribals of Bastar,the dalits of Gujarat ,the people of Kashmir or on the workers movements in Bengal the administration has unleashed repression as never before.

We must always remember the words of Mao that India never carried out a true agrarian revolution.

Even if it is not fascist or likely to become one as the regimes of Hitler and Mussolini repression could take place in another shape.

The arrest of professor G.N.Saibaba is an excellent illustration.

Remember how in the past M.K.S.S. peasant organization was banned in Bihar and the mass organizations like A.P.R.S.U and Rythu Coolie Sangham in Andhra Pradesh.

The recent spate of attacks on dalits in Dadfri and Gujarar illustrate the conspiracy of ruling class parties and goverment against the dalit community.

The arrest of mass leaders of the zameen prapti sangharsh commitee in Sangrur supporting the rights of dalit farmers is an ideal illustration of this phenomena.

It is great to see forces however small heroically standing up against repression sowing the seeds for organized protest.

We must educate the masses about how regressive the govt policies have been since 1947 be it Nehru.Indira Gandhi,Morarji Desai,V.P.Singh, Narasimha Rao or Narendra Modi.

The basic semi -colonial and semi-feudal nature has remained intact. in different forms.One can never forget how in Delhi police prevented programmes on Kashmir form being staged in university campus and the prevention of the forum for revolutionary democracy in Hyderabad in 2014 September.

The path that China undertook from 1949 -76 was identically opposite to what India took up representing democracy at it's highest zenith.

In the history of mankind such revolutionary democracy was not achieved nor such achievements in the fields of medicine, housing, education and production in 3rd world countries.

Below I am re-posting excerpts of writings on the Independence of India from the basic documents of the C.P.R.C.I.(M.L.) posted on Maoist Documentation project.

Around the end of the Second World War--when world fascism was defeated by the world socialist. democratic and revolutionary forces led by the Soviet Union--our country witnessed a great revolutionary upsurge against British imperialism and native feudalism. In the general upsurge, the revolt by the ratings of the Royal Navy, the armed struggle of the peasantry in Telangana, the heroic Tebhaga movement of the Bengal peasantry, the movement of Punnapra Vayalar in Travancore (Kerala), peasant revolts in the princely states and Railway workers' militant strikes, are some of the notable events.

This revolutionary tide in India was part and parcel of the worldwide upsurge against fascism and imperialism.[1]

The British rulers in India, seeing that they could be swept away by the great upsurge of the people, hastened to transfer power to the comprador bourgeoisie and the landlord classes. Along with the main factor of people's revolutionary upsurge, U. S. imperialist pressure played an important role in pushing British imperialism to relinquish its direct colonial hold over India [2]

Consequently, though the British rulers left India, British monopoly capital remained intact.[3] The new State of Indian Union that came into existence in 1947 was the State of the comprador bourgeoisie and the landlords, serving and protecting the interests of imperialism in general and domestic semi-feudalism in particular.

Indian "independence" was, and continues to be, formal. The Indian people were deprived of the fruits of their valiant fight for freedom because the Indian National Congress, whose leadership represented the interests of the comprador bourgeoisie and big landlords, had succeeded in usurping the leadership of the national democratic movement, ultimately to betray it.

This they could do primarily due to the weakness of the communist movement and the failure of the communist leadership. Steeped in right opportunist deviation, the communist leadership failed to contend earnestly for proletarian hegemony in the national democratic movement and failed in grasping and concretely applying Marxism-Leninism to unleash the powerful people's movement in a revolutionary direction as could carry the revolution through to the end (over the heads of reactionary Congress leaders).

Throughout this period, communists had been fighting many heroic class battles.

Nevertheless, in the long run they lost the war owing to the lack of a general-staff which could equal the situation.[4] Thus, in the face of the failure of the communist leadership, the treacherous Gandhian leadership was able to betray the surging national revolutionary movement, and the 1947 Award as well as the Partition, was an outcome of that betrayal.

The glorious vision of our valiant fighters and martyrs, and the revolutionary national and democratic tasks, remain yet to be fulfilled.

The State of Indian Union that came into being in 1947, under an Act of the British Parliament, inherited the ruthless and alienated colonial State-machinery intact.

The comprador bourgeoisie and the landlord classes as true inheritors of the colonial State, baptised themselves as the new ruling classes of India by drowning the revolutionary struggles of the Indian people in blood. 1.2

One of the early steps taken by the new rulers for the consolidation of the Indian State--including its adaptation for neo-colonial exploitation--was abolition of princely states and their integration into the Indian Union.

Another step was the passing of the first industrial policy resolution (1948):The Resolution clarified that British monopoly capital would not he confiscated; that doors would be opened to imperialist capital generally; that India's development as visualised by its new rulers was in line with what the colonial power had visualised; and that it would continuously seek foreign finance capital.

The Constitution of India, too, adopted in 1950, was a virtual replica of the British India Act of 1935: it constructed a structure of State power which was autocratic in content though it put up a facade of a parliamentary system; "universal adult franchise" was superimposed on a people oppressed countrywide through the new semi-colonial semi-feudal form of socio-economic organisation. 1.3

Thus, "independence" or "transfer of power" amounted to installation in State power of the native collaborators mainly of British colonialism and turning of British colonial India into a new type of semi-colony of the major imperialist powers while retaining its semi-feudal social character. 2. It is these forms of socio-economic organisation which have varied and changed over the years since the transfer of power, preserving all along the basic content that is semi-colonial and semi-feudal.

Actually, preservation of semi-feudal agrarian relations under the growing all-round sway of finance capital has remained the key premise of all official strategies and steps. 2.1 The "displaced" princelings were given huge assets, land, and purses which instituted them among the new kind of semi-feudal powers who controlled local politics and could at will enter comprador industry, become managing agencies for it, or enter the business of parliamentary power and loot--ranging from the "panchayats" to the "lok sabha". 2.2

, the legal framing and implementation of "land reform"--abolition of zamindari, securing of tenancy rights, ceiling on landownership land consolidation, and co-operative credit and marketing institutions--by no means changed land relations in favour of the toiling peasantry.

All of this rather was implemented principally to help the rapacious landlords, present on the scene, to consolidate their economic power, although there were a few formal changes in the profile of the landlord class and nominal distribution of land among some peasant families.

However, the official slogan of reform confused, for some time, sections of the peasantry with the illusion of peaceful democratic change and gain. 2.3

Later in the sixties, the ruling classes took up the slogan of "green revolution", relegating into background the worn-out slogan of "land reforms"to forestall peasant unrest. It was done on the excuse that land reform could not work in India and that the country would be made self-sufficient in food grains by promoting the "viable farmer" (i.e. the big landlords) and by intensive application of inputs in agriculture.

But these were limited to few pockets and few crops.

Again, the principal beneficiaries have been the big landlords who utilized these funds to reinforce their economic, social and political hold over rural working people.

The"green revolution" has only tied agriculture to high-value industrial inputs which are either imported or manufactured here in collaboration with foreign monopoly capital. It has, thus, progressively put large sections of the peasantry at the mercy of foreign monopoly capital and bureaucrat capital, and at the mercy of middlemen and powerful local speculators.[6]
Posted by nickglais on 8/15/2016 11:35:00 AM