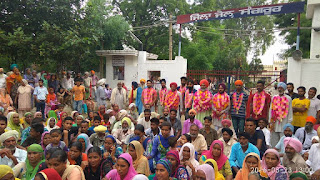 Earlier a gherao of CM Badal was to take place but was cancelled because of conceding of demands.

It is a lesson on how peoples protracted movements can win battles like release of leaders.

Democrats should salute the determination of youth activists for this victory.

Chandigarh, August 23 All 10 Dalit farmers who were arrested in connection with the Balad Kalan Panchayat land agitation, were released from the jail today.

They were lodged in the Sangrur jail for the past three months and had refused to seek bail taking the plea that they had been implicated in a false case.

The farmers were booked by the Bhawanigarh police in Sangrur district on May 24 and May 25 under various sections of the IPC. Though cases were registered against about 70 persons, only 10 were arrested and sent to jail.

Dalits have been agitating in various villages of Malwa to take their due share of Panchayat land on lease at reduced rate. However, there was a resistance on the part of the official machinery in this regard.

To press the authorities concerned, they had launched an agitation. Of late, Balad Kalan village, where Panchayat owns a vast tract of land, had become the epicentre of the Dalit agitation to get the land rent reduced.

The Tribune had carried an in-depth report about the agitation and arrested Dalits on last Sunday.
Mukesh Maludh, a leader of Zameen Prapathi Sangrash Committee (ZPSC), the oranisation under the banner of which the agitation was launched, said the district police authorities today completed the necessary formalities and informed the court that they did not want to proceed further in the cases registered against the Dalits of Baland Kalan village.

Rampal Singh, a member of the Committee from the Balad Kalan village, said police had recorded statements of certain people from the village yesterday. The villagers had stated that the Dalits had taken part in the dharna but had not resorted to violence. False cases had been registered against them. The statements were made the ground to release the farmers, Rampal said.

Meanwhile, the district administration has reduced the lease rate of the panchayat land to Rs 20,500 per acre per annum from Rs 24,000 per acre, which was charged last year, for Dalits of Balad Kalan. About 85 acres of panchayat land has been given to them on the reduced rate this year.