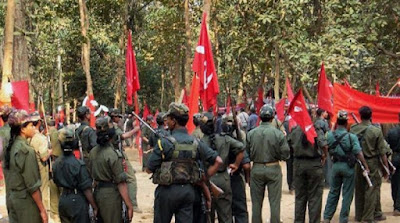 Personally I think the statement below is distorting the true facts.and is not the official stand of the C.P.I.(Maoist) .I would never forecast that the C.P.I.(Maoist) would pledge a united front with revisionist parties like C.P.M.

This would mean treading the path of C.P.I.(M.L.)Liberation group which started this path in 1988.Ony the cadres of left parties are secular Otherwise CPI or C.P.M.have been forming alliances with ruling class parties like Congress or even the B.J.P.

It may have secular and progressive stances like being critical of globalization and communal fascism but it's practice does not reflect a progressive trend.

Did they play any effective role in resisting communal riots in Mumbai in 1993 or stop Babri Masjid demolition?Do they not take a centrist stand on Kashmir?

Making an alliance with such parties would be throwing the Maoist party into the quagmire of revisionism.

I can't forget how in Mumbai revolutionary groups mass organizations were towing the left parties in the 1990's through the ekta samiti who formulated no agenda to thwart the communal fascism.

We must get confirmation that this statement may well be the work of the intelligence.

Democracy and Class Struggle has been aware for some time of new orientation in CPI Maoist thinking on united fronts and would welcome clarity from the party on this question rather than comments to bourgeois press.

The banned CPI(Maoist) has expressed its willingness to join hands with parliamentary Left parties to put up a united fight against ‘Hindutva forces.’ The offer has left the Left parties divided .

While CPI and RSP readily welcomed the proposal, CPI(ML)(Liberation) and Forward Bloc are unsure about the prospect of coordinated movement with an outfit that essentially propagates armed struggle. SUCI (C) said they will not object if other Left parties agree.

Bachcha Prasad Singh, a CPI(Maoist) politburo member, who was arrested from Kanpur in 2010 and released on bail recently, has expressed this willingness to form ‘a broader united front’ in an interview given after his release.

“In my opinion the way to confront the present scenario is to form a strong resistance and a broader united front against Hindutva forces. It does not matter if the front includes Leftist parties in Parliament. It is the time to stay united, to forget our dogmatic and ideological differences and remember what Lenin said “divided we fall, united we will,” Singh said in an interview with a blog, kafila.org.

Responding to queries sent by HT, a senior Maoist leader said, “It’s is not his personal opinion. He is conveying the stand of the party.”

CPI central secretariat member and former MP Gurudas Dasgupta said his party welcomes the proposal. “Hindu fundamentalism is the greatest danger the country is facing and it is threatening the secular fundamentals of the country,” Dasgupta told HT. He added that all secular forces need to be united.

“Our party has no objection to Maoist participation in mass movement against Hindu communalism,” former Left Front minister and RSP West Bengal state secretary Kshiti Goswami told HT.
Sources in the Maoist outfit told HT that Singh’s statement is in pursuance of the party’s official policy regarding forming ‘united fronts’ outlined in its internal publications over the past couple of years.

They pointed out that the special issue of CPI(Maoist)’s central theoretical organ, People’s War, published at the end on 2014, gave special thrust on forging ‘tactical unit fronts’ with mainstream political parties, NGOs and rights organisations and spelt out guidelines on how to work together.

“The Communist party should continuously take an initiative by uniting allies through long-standing efforts and patience,” politburo member Mallojula Venugopal Rao alias Sonu wrote in an article on the necessity of forming united fronts.

Political observers feel Maoists’ plan may get some response only in pockets of Chhattisgarh, Odisha and Andhra Pradesh, where CPI has some bases. The strength of RSP, active in West Bengal and Kerala, has weakened significantly.

“In the past, activists of CPI and the CPI(Maoist) were seen participating in mass agitations together in Chhattisgarh and Odisha,” a source told HT.

CPI(ML) (Liberation), however, is not optimistic about the prospect of the Maoists participating in any movement led by mainstream Left parties. “I’m not sure whether it is possible as long as the Maoists keep prioritising military movement. They need to decide first whether they want to lead a military movement or a political movement,” CPI(ML)(Liberation) politburo member Kavita Krishnan told HT.

Forward Bloc, too, made similar observations. “We will be ready to welcome them in mass movements after they abandon armed struggle. Otherwise, their presence in mass movements will bring unnecessary harassments and police repression for the activists of movements,” Forward Bloc central committee member Hafiz Alam Sairani said.

SUCI(C) general secretary Prabhash Ghosh said that an alliance of Left wing outfits – comprising CPI, CPI(M), CPI(ML)(Liberation), RSP, Forward Bloc and SUCI(C) – are active in the national level and that their party has no objection to the Maoists’ proposal if other constituents of the alliance agree.

Sources in the Maoist party told HT that among the mainstream Left parties, they have strong reservations against the CPI(M), which it calls ‘a social fascist force’.

They are unlikely to send any emissary to the CPI(M).