The Communist Party of the Philippines (CPP) today said the New People’s Army (NPA) must further expand use of command-detonated explosives (CDX) in launching tactical offensives against the reactionary armed forces, police and all its attached paramilitaries. 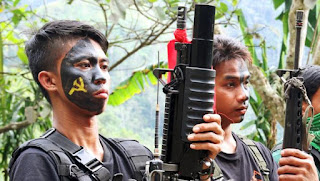 The Communist Party of the Philippines (CPP) today said the New People’s Army (NPA) must further expand use of command-detonated explosives (CDX) in launching tactical offensives against the reactionary armed forces, police and all its attached paramilitaries.

“The CPP and NPA reject the baseless demand of GRP President Rodrigo Duterte for the NPA to stop using CDX landmines which are legitimate weapons of war and are allowed under the Geneva Conventions and the Ottawa Treaty on Landmines.”

According to Duterte, he has long repeatedly told the NPA in Mindanao to stop using landmines which he claims are banned under international conventions. “Perhaps, he has not been closely listening to explanations about landmine conventions and distinctions made about different types of landmines.”

“The aim of the Ottawa Treaty banning anti-personnel landmines is to protect civilians from accidental explosions,” pointed out the CPP. The Treaty defines anti-personnel mines as those designed to be exploded by “the presence, proximity or contact of a person.”

“The explosives and landmines used by NPA are command-detonated or blasted manually, some with a battery-powered electronic trigger held by a Red fighter,” added the CPP. “CDX landmines, which NPA ordnance units manufacture carefully, will not explode simply if it is stepped on, tripped upon or kicked around.”

“Furthermore, CDX landmines are not laid out indiscriminately and are always manned or within the immediate proximity of the NPA unit that emplaced them,” pointed out the CPP. “There has yet to be an incident where a CDX landmine laid by the NPA was accidentally exploded by a civilian.”

“The NPA is very careful about using weapons that may accidentally hurt or injure civilians,” said the CPP. “Even indigenous booby traps such as punji sticks are used with discrimination and are not left unmanned.”

“Contrary to Duterte’s demand for the NPA to stop using its CDX landmines, the NPA and the people’s militias must further expand the use of such weapons,” said the CPP.

It added: “CDX landmines are a poor man’s weapon. These are mass-produced by people who have no recourse to the expensive rockets and howitzers of state-funded armies.

It is a weapon than can only be effectively used by those who have mastery of terrain. It must continue to be effectively and widely employed in waging mass guerrilla warfare.

The mass movement to manufacture CDX landmines must be stepped-up. Every unit of the NPA, including all units of the people’s militias, must have their own supply of CDX landmines, and must have the skill and plan to employ these as defensive and offensive weapons against the enemy.”

“CDX landmines have been proven to be highly effective weapons at thwarting the frenzied military offensives of the AFP,” said the CPP. “This is the reason why the AFP has been so adamant in its demand for the NPA to stop using CDX landmines to the point of mindlessly citing international prohibitions even without a comprehensive and clear understanding of those.”