Urban Agriculture: A new axis to boost the Venezuelan economy By Jesus Rojas 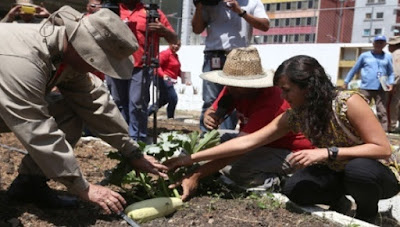 
As part of the activation of the 14 engines of the national economy, President Nicolas Maduro said to activate the Urban Agriculture Plan which serves to boost and strengthen food sovereignty.

Doing a thorough analysis of this plan, the Urban Agriculture is defined itself as one method of cultivation made at home, community and city providing food products of different types of planting such as grains, vegetables, fruits and animal poultry origin, rabbits, goats, sheep, cattle, pigs, fish and non-food as aromatic, medicinal, ornamental plants, among others.

Taking into account its contribution to the sustainable development of societies and food security of families, urban agriculture is the new line of action in the Venezuelan economy.

Despite of all attempts to make this not happen, the Bolivarian Economic Agenda (BEA) has found its own path and has served to avoid the worst deprivation ushered in by neoliberalism; it served thus as another way to protect the people against this adverse time. It is not and will not be easy.

The fall in oil prices, international financial strangulation against our country, in addition to the economic war and internal economic imbalances create a complex situation that has no magic solutions. Against this, the BEA seeks to find answers in the short term while seeking structural solutions. And in this dual objective, the productive economy emerges as a necessary condition.

Amid this context, urban agriculture has entered very strongly as a new productive, social, cultural and economic practice. In a very short time, it has established itself as a power player since it was announced by President Nicolas Maduro earlier this year.

It is not a new idea because Hugo Chavez himself already talked about this need before the coup of 2002. The importance of rediscovering the agricultural vocation of urban areas called for taking advantage of the verticality of the cities.

Urban Agriculture responds to this challenge of the XXI century, and its response becomes more important now, in a situation of economic emergency.

The great potential of this new axis results from the simultaneous combination of multiple features:

1) Appeals to the productive narrative connecting the individual effort of the most diverse subjects with a national collective project;

2) It is  formed as an indispensable material bastion of the new productive time;

3) Incorporates a significant stamp of the new economic policy;

4) It gives hope in the  building of positive expectations forward;

5)  every human being is grafted as a new productive Actor (Urban Agriculture, Human Agriculture), and consequently, economic activity is democratized; ;

6) It is in tune with the territory and returns to the Bolivarian project as a tool for the construction of a  political and productive density at a local level;

7) it is  more closely linked to the producer and consumer reducing distributor`s dependency;

8) It delineates the morphology of the new productive cities that requires this new stage. Therefore, urban agriculture would cease to be marginal.

On the contrary, it would become an economic centrality and powerful political instrument for this new stage.

This compels it to play the directionality of other economic policies (financial, tax, investment, commercial) in favor of itself. For this reason, we must be very ambitious about urban agriculture - we cannot conceptualize it as a trendy, lifestylist fad.

It must be promoted on a scale large enough for it to be a practical solution to real social problems."

Until now the first 100 days of Urban Agriculture Plan has been fulfilled with satisfactory results. The first thing that has been achieved is realization of the rationality and common sense connected with this project.  It has begun to bear fruit in the real, and now you can eat the new products that are being harvested in the cities themselves.

It has been made much progress in respect to its institutionality. It is being able to create effective mechanisms to produce its own seeds and fertilizers. That is an important step in the productive sovereignty. It also proposes to reorganize public space for this activity and mobilize public in favor of this collective productive project.

The next step must be to have own financial instruments (to be part of compulsory productive loans portfolio of public and private banks) to advance with firm steps in order to make this economy irreversible. Urban Agriculture has the challenge of building alliances with the rest of the economic and technology policies and thus achieve a sustainable development as the time goes by.

Urban Agriculture is presented to the country as an effective response to the economic emergency. it doesn`t want  to be any patch or a bird of passage. It came to settle in the new economic and social metabolism. Only in this way, it can be done.