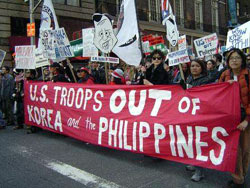 The CPP issued this statement as Aquino’s foreign affairs secretary Alberto del Rosario yesterday announced that the Aquino regime is set to start talks with the US government to forge the access agreement.


“Heightened US military aid to the Philippines, which mostly takes the form of providing decommissioned war materiél, is also Obama’s reward to Aquino who has exhibited unquestioning servility to the US,” added the CPP.


The CPP charged that this would only further strengthen the US’ foothold in the Philippines. “Even without the planned agreement, the Philippines has already been serving as a vast US military base, with American warships, jet fighters, drones and combat troops maintaining a permanent presence in Philippine territory.”


The CPP further pointed out that the US military has been maintaining an exclusive military base within the AFP Western Mindanao Command headquarters in Camp Navarro in Zamboanga City. Even Filipino officers are banned from the area reserved for the 700-strong Joint Special Operations Task Force-Philippines (JSOTFP).


“Under the Aquino regime, Philippine sovereignty has depreciated severalfold,” said the CPP. “The Aquino regime has blindly allowed the US military to make use of the Philippines as a base of its operations in its declared aim of deploying more than half of its overseas military strength into the Asia-Pacific region.”


“The permanent and increasing presence of the US military in the Philippines has provoked China to become more aggressive and has worsened diplomatic tensions among the various claimants of disputed territory in the South China Sea.”


“Violations of Philippine sovereingty are bound to worsen with the new access agreement effectively granting the US basing rights in the Philippines.”


“Increased military aid to the Philippines will also result in worsening violations of human rights abuses committed by the reactionary armed forces in the conduct of its US-designed Oplan Bayanihan war of suppression,” pointed out the CPP.