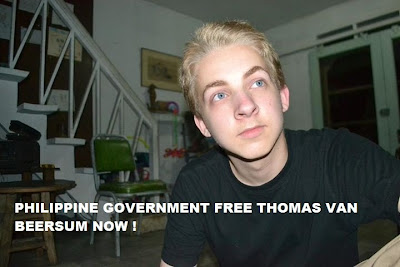 UPDATE FROM THOMAS
Am now in Hong Kong waiting for my flight back to Amsterdam. I was not allowed to board my plane and to go back to my country yesterday morning. I got detained for about 30 hours at the airport just so the immigration officials could deport me. This harassment is obviously done to distract the people from the actual problems that the country faces, such as the almost total domination of its econom...y by foreign capitalists and the complicity of comprador puppets such as Aquino. And let's not forget the human rights abuses under Aquino's administration either. So far there have been 142 documented cases of extrajudicial killing and 164 frustrated killing; 16 incidents of enforced disappearance; 76 cases of torture and 293 cases of illegal arrest and detention.

I want to thank the people and groups that have been supporting me and although I've been blacklisted, I will still firmly support the just struggle of the Filipino people for social and national liberation. Mabuhay

Democracy and Class Struggle call for the immediate release of Thomas Van Beersum by the Philippine Government.


“While notorious human rights violators and corrupt officials can freely go in and out of the Philippines, Dutch activist Thomas van Beersum was detained by the Bureau of Immigration today.

Clearly, he is being persecuted by the Aquino government for exercising his freedom of expression…” – Karapatan

MANILA — A Dutch activist who joined the protest action during the State of the Nation Address of President Benigno Aquino III was prevented from leaving the country by immigration officials.

Thomas van Beersum is being held at the Ninoy Aquino International Airport (NAIA). He became prominent when photos of him castigating a policeman for the violent dispersal during the SONA demonstration came out.

In a phone interview with Bulatlat.com, Ephraim Cortez of the National Union of Peoples’ Lawyers (NUPL) who was able to talk to Van Beersum over the phone, said the Dutch activist was being asked to get a clearance from the National Bureau of Investigation (NBI) before he can leave the country.

Cortez said a certain Soloren who introduced himself as an intelligence officer of the Bureau of Immigration told him over the phone that Van Beersum needs to secure a clearance from the NBI stating that he is not facing any pending charges.

As of press time, Cortez is seeking ways to talk with the Dutch activist in person. “He is not aware of any charges filed against him,” Cortez told Bulatlat.com. “He did not do anything illegal and merely voiced out his opinion regarding the human rights situation in the country. He was only exercising his freedom of speech.”

Van Beersum was one of the more than 200 delegates of the International Conference on Human Rights and Peace in the Philippines held last month in Manila. In his open letter to Joselito Sevilla, the policeman whom he was seen shouting at during the SONA protest, Van Beersum said: “I attended the SONA protest because I had been outraged by the human rights violations committed by the corrupt Aquino regime.”

“We demand that his rights be respected, that he not be paraded like a criminal,” Bayan said.

Cristina Palabay, secretary general of human rights alliance Karapatan, said: “While notorious human rights violators and corrupt officials can freely go in and out of the Philippines, Dutch activist Thomas van Beersum was detained by the Bureau of Immigration today. Clearly, he is being persecuted by the Aquino government for exercising his freedom of expression, a right guaranteed by the UN International Covenant on Civil and Political Rights even of non-citizens, and his support for the campaign against extrajudicial killings and other human rights violations.”
Posted by nickglais on 8/06/2013 09:33:00 AM

In and of it all I am happy he is somewhat released. Still, it seems his level of activity had pushed too many keys of Philippine regime's nerves.