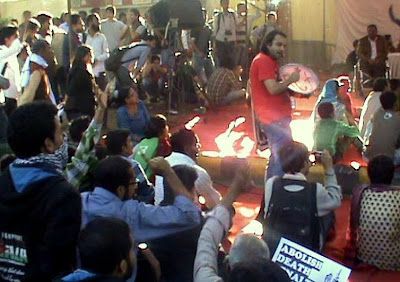 Condemn the arrest of Comrade Hem on fake charges by the Maharashtra police!

Resist the ongoing witch-hunt of students, intellectuals and activists who dare to stand up against systemic injustice, oppression and state repression!

Immediately & Unconditionally release Hem who was on his way for medical treatment!

The Maharashtra police has arrested Hem Mishra reportedly from around Gadchiroli and having framed him as a “prominent naxal courier”. Canards and lies are already making the rounds in the corporate media about his alleged “links” and so on. Hem is a member of Democratic Students Union; a cultural activist since his days in Uttarakhand till he also joined the Revolutionary Cultural Front in JNU; an Executive Committee member of the Committee for the Release of Political Prisoners; and till recently he has been a student of Jawaharlal Nehru University doing his BA in Chinese from SLL&CS. Hem has been struggling over the years with certain physical challenges in his left hand.

He has undergone repeated surgery and the ensuing complications left him in agonizing pain. He has had to undergo two rounds of expensive operations in the recent past from Vellore. He had on several occasions shared his wish to pay a visit to Prakash Amte’s People’s hospital in Gadchiroli to enquire about the possibility of free treatment therein. Early this week he had left from Delhi with the same purpose and was picked up by the notorious Maharashtra police somewhere in Maharashtra on his way to the hospital. Hem is a prominent student and cultural activist. He is well known among the political circles in Delhi and Uttarakhand.

Yet the police are trying to frame him with bogus charges like, he is a ‘prominent Naxal courier!!’ Hem has a played a prominent role in exposing as well as countering the anti-people designs of the state through songs, poetry, plays and street theatres in the capacity of a cultural activist lending his voice to that of the oppressed. He, as part of an organized politics, shares the vision for a radical social transformation of the society towards a new democratic society and a new democratic culture – free of oppression, injustice and inequality.

His arrest therefore doesn’t come as a shock. The state right now is in a spree to clamp down on students and democratic rights activists and trying to stifle voices of dissent. We strongly condemn this witch-hunt of activists. We must unitedly and resolutely fight the fascist designs of the state and its targeting of political activists
Posted by nickglais on 8/24/2013 12:25:00 PM

Thanks for the widely informed statement and, hopefully, we will get solidarity for people of Wales struggles someday from around the world including India as well.