India: The POSCO Issue where do we stand ? by Asit Das 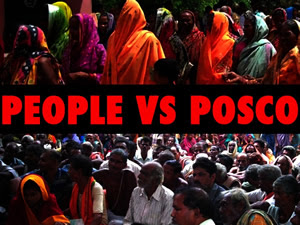 THE POSCO ISSUE WHERE DO WE STAND?


Dear Friends and Comrades,
All of you might be aware of the tragic turn of events in the anti-POSCO struggle area. Last week armed police conducted flag march, raided homes, and were forcibly trying to erect a boundary wall to democrat the area for POSCO. The events which have unfolded for the past two months especially after the arrest of Mr. Abhay Sahu the president of POSCO Pratirodh Sangram Samity raises many pertinent questions about the nature of the leadership and their relationship with Odisha Govt. and POSCO. Needless to say is that Mr. Abhay Sahu president of PPSS is a National Council member of CPI and Mr. Shishir Mohapatra secretary of PPSS is a card holding member of CPI. Their role in the past two months has raised many eyebrows not only in the anti-POSCO struggle villages, but in the media and the entire thinking population of Odisha.
The latest attitude of PPSS is quite disturbing for 4 days last week armed police have been conducting flag marches, raiding homes in Gobindpur, and also they have been trying to constructing a boundary wall to demarcate the land for POSCO, this was successfully resisted by the people of Gobindpur. Strangely PPSS didn’t come out with and update when I heard about it I immediately circulated on update. My update was widely circulated in different activist website and list serves. Then a day after my update was circulated Willy PPSS update came out duly signed by Prashant Paikray the official spokes person of PPSS. This makes the position of PPSS and CPI highly suspect. Over the years whenever any such incidents were to happen in the anti-POSCO struggle villages then within hours PPSS update was circulated and Prashant Paikray used to make numerous phone calls to different metropolitan centre. Strangely this time the update came a day after my update was circulated where I had pointed out why the PPSS update has not been circulated.
Senior activists of Odisha like Shri Prafulla Samantra and Sudhir Patnaik who are intimately involved in the Anti-POSCO struggle from the day one and know the movement and its internal dynamics thoroughly have suggested that the left and democratic organizations and anti-POSCO struggle solidarity groups should write an open letter to CPI and PPSS questioning their role in the murky deal between Odisha Government and PPSS and between CPI and BJD.
There is a propaganda in the mainstream media that the POSCO struggle is over and the Odisha Govt. has successfully acquired 2700 acres of land in Gobindpur, Nuagaon on and Gadkujang. The statements’ quoted from Govt. of Odisha official and POSCO management that Govt. of Odisha will soon handover the 2700 Acres to POSCO for the first phase. Those of us were involved in the anti-POSCO struggle should make an objective assessment of the situation and take a firm stand.