“You can’t? We can!” Workers at Mining Industry factory in Northern Greece vote for and prepare for self-management of their factory – victory to the workers! 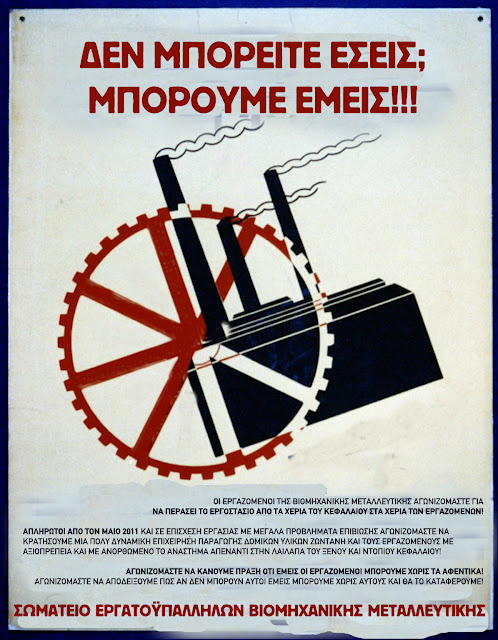 Concerning the struggle at VIOMIHANIKI METALLEYTIKI (Mining Industry) in Thessaloniki

The administration of VIOMIHANIKI METALLEYTIKI, a subsidiary of Filkeram-Johnson, has abandoned the factory since May 2011, along with its workers. In response, the workers of the factory abstain from work (epishesi ergasias: the legal right of workers to abstain from work should their employer delay their payment) since September 2011.

The Workers Union at Viomihaniki Metalleutiki has organised 40 workers all of which are, to date (one year after the closure of the factory) active, taking shifts at the factory to ensure that no equipment is removed by the administration or stolen. All the workers also participate in the General Assemblies.

In regard to the initial capital, which is necessary for the operation of the factory, the proposal of the workers is for the Greek Manpower Employment Organization (OAED) to pay them in advance the sums they are already entitled to after becoming redundant.

Finally, the workers at Viomihaniki Metalleutiki demand the introduction of legal status for co-operative enterprises, in order for their own and for future initiatives to be legally covered.

In the struggle of the workers of Viomihaniki Metalleutiki, apart from the self-evident value that we see in every workers’ struggle and every workers’ demand, we also recognise an additional value, which comprises exactly of this proposal of self-management.

We believe that the occupation and the re-operation of factories and corporations by their workers is the only realistic alternative proposal in face of the ever-increasing exploitation of the working class. The self-organisation of factories that close down is the only proposal that has the force to mobilise the working class – which, living under the constant threat of unemployment, cannot see ways in which it can resist.

We know that the difficulties we shall face in the struggle for the self-management of the factory are many, since state and capital will fiercely stand against it – as a possible victory shall create a precedent and and example for any other struggle in the country. Yet the question of whose hands the production lies in becomes a question of life and death for a working class pushed into degradation. For this reason, the workers’ struggles orientated in this direction and the forces standing in solidarity to these struggles should be prepared to clash with state and the administration in order to materialise the occupation of the means of production and the workers’ self-management.

We call for every union, organisation and worker to stand in solidarity to the struggle of the workers of VIOMIHANIKI METALLEYTIKI and to actively support the workers both financially and politically.