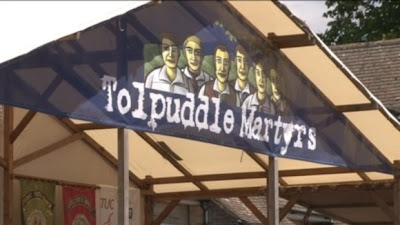 The Festival rally is a free part of the event which celebrates trade unionism It is an important year for the Tolpuddle Martyrs' Festival in Dorset due to UK government austerity measures, according to the TUC.

The TUC said the current high level of cuts to public service jobs had not been seen since the 1920s.

A spokesman said the festival, which is on until Sunday, was a time to "refresh and recharge before the battles ahead".

The festival celebrates the story of six farm workers who formed the first trade union in 1834. Illegal oath The six Tolpuddle Martyrs were agricultural labourers who formed a "friendly society" - a forerunner to a trade union - and swore an illegal oath to protect their falling wages. They were put on trial at Dorchester Crown Court and sentenced to seven years' transportation to an Australian penal colony.

But the outrage about their punishment caused protests across England and after four years they were given a complete pardon, and returned to their homeland.

Nigel Costley, South West TUC regional secretary, said the annual festival and rally was a time to debate alternatives to the cuts He said: "The festival is more relevant this year than ever before because we're seeing the same struggles today that were seen in 1834. "People at the very top tend to be on jack-pot earnings, while the rest find themselves on their knees - it's astonishing. "It's essential that we remind people what the worth of trade unions are in the workplace."

Thousands of people attended the three-day festival of music and political discussion. One of the highlights this year is a celebration of the 100th anniversary of the birth of political US singer-songwriter Woody Guthrie.
Posted by nickglais on 7/15/2012 02:28:00 PM