Hail the formation of the new Maoist party in Nepal by CPI (ML) NAXALBARI! 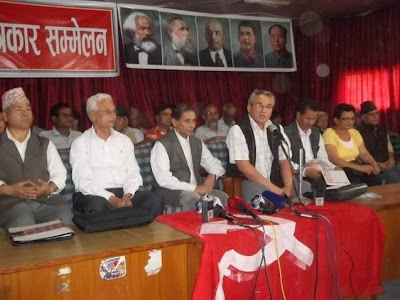 Hail the formation of the new Maoist party in Nepal!

The formation of a new Maoist party by the revolutionary faction that broke away from the United Communist Party of Nepal (Maoist) is a matter of great joy for the international communist movement and the peoples of the world.

In its message to the new party the Central Organising Committee of the CPI (M-L) NAXALBARI has saluted its formation and stated that 'This historic step accords to the revolutionary aspirations of the people of Nepal.

It is enthusing to all, throughout the world, who have watched with grave concern the Prachanda/Bhattrai attempts to liquidate the Nepalese revolution and enforce capitulationism.' After noting the National Conventions evaluation that 'The creation of People's Liberation Army, establishment of base areas and people's government, role played by workers, peasants, women, indigenous nationalities and Dalits; and the awareness developed in this whole process are some of the major achievements we have gained..'and its decision to 'move forward by standing upon this base.', the message goes on to say, 'This is decisive in turning away from the disastrous path followed by Prachanda and Bhattrai.

We wish you all success in this crucial task. No doubt, this depends on deepening the summation of the deviation while firmly and fully separating from the strategy and tactics it has used to derail the revolution.'

The formation of a new Maoist party has created serious problems for Indian expansionism and imperialism. On the one hand it tries to downplay it as 'an insignificant splinter'.

On the other it steps up its overt and covert intervention in Nepal, including veiled threats held out by increasing its armed deployment along the border.

The response of the oppressed masses is exactly the opposite. They are gladdened by the bold step taken by the Maoists in Nepal and keenly look forward to their reopening the revolutionary road.

the naxal statement is good, but Bob Avakian made the same criticism much earlier. without the New Synthesis, the Kiran faction is nothing. it is our internationalist duty to promote the new synthesis in Nepal.