Support the Great Unrest Group 2012 for a Welsh Socialist Republican Party struggle for a Welsh Land Act to prevent more Wind Farm Corporate Scams being imposed on the people of Wales via Crown Estates and Absentee Aristocratic Landowners. NO to Land Grabs in Wales !

Time to do battle with Corporate Greens and promote the real renewability and sustainability of Via Campesina - The International Peasant Movement the real green solution in Wales. Listen to Via Campesina on how to fight Global Warming and Global Capitalism in video below on Food Sovereignty. 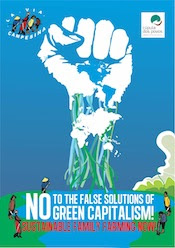 No to the false solutions of Green Capitalism

One of the main causes of global warming is agro-industrial farming itself, and the global food system associated with it.

Although it is scarcely ever mentioned, farming is responsible for 14 per cent of greenhouse gas emissions. Within farming, the largest single cause is the use of chemical fertilisers, which introduce a huge amount of nitrogen into the soil, and nitrous oxide into the air. Changing land use (mainly deforestation and thus linked to the expansion of crop monoculture) is responsible for another 18 per cent. And a large part of global transport, which is responsible for a further 14 per cent of emissions, stems from the way in which the agro-industrial complex moves large quantities of food from one continent to another.

Democracy and Class Struggle welcomes the collapse of green market carbon trading schemes - they were ecologically disasterous and fraudulent to boot..

If you want to know what real sustainable agriculture is there is no better place start than visiting Via Campesina and their great knowledge base of community agriculture.

We want real democracy and real green sustainable agriculture which is why the world needs to go beyond capitalism to revolutionary socialism - Maoism.