The British government accepts that colonial forces in Kenya tortured and abused detainees during the Mau Mau rebellion, the High Court has heard. 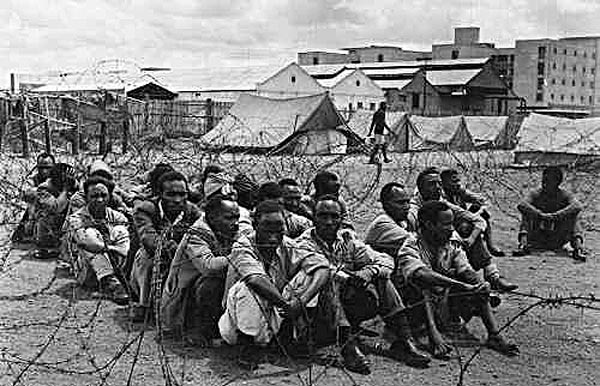 Three elderly Kenyans who are suing the government for damages were told it did not dispute that "terrible things" had happened to them.


Their lawyers say it is the first ever official acknowledgement by the UK.


The revolt against British rule in Kenya in the 1950s and 1960s was marked by atrocities, with thousands killed.


The British government argues that too much time has passed for a fair hearing to be conducted.


Before starting cross-examination of witnesses, the QC for the British government, Guy Mansfield, said he did not want to dispute that civilians had suffered "torture and ill-treatment at the hands of the colonial administration".

He spoke directly to each of the witnesses, saying he did "not want to dispute the fact that terrible things happened to you".

Papers in the test case were first served on the UK in 2009.

In 2011, a High Court judge ruled the claimants - Paulo Muoka Nzili, Wambuga Wa Nyingi and Jane Muthoni Mara - did have an arguable case.

The claimants' lawyers allege that Mr Nzili was castrated, Mr Nyingi was severely beaten and Mrs Mara was subjected to appalling sexual abuse in detention camps during the rebellion.

A fourth claimant, Ndiku Mutwiwa Mutua, has died since the High Court ruling that the test case could go ahead.

With the help of interpreters at the High Court, the three - now in their 70s and 80s - were briefly questioned about written evidence they had provided.

In a 20-page statement, Mr Nzili, 85, gave details of being stripped, chained and castrated, with large pliers normally used on cows, at Embakasi detention camp, near Nairobi.

He said: "I felt completely destroyed and without hope. I have never had children of my own and never will have. I am unable to have sexual relations with my wife."

Mrs Mara, 73, submitted evidence describing how, at the age of 15, she was taken to Gatithi detention camp, where she was beaten by the British and subjected to sexual abuse with a glass bottle containing very hot water.

She said she had felt "completely and utterly violated", adding that the pain "has been bad ever since the beatings and has worsened as I have aged".

"I do not understand why I was treated with such brutality for simply having provided
food to the Mau Mau.

"I want the British citizens of today to know what their forefathers did to me and to so many others. These crimes cannot go unpunished and forgotten."

In his statement, Mr Nyingi, 84 - a father of 16 who still works as a casual labourer - described being arrested on Christmas Eve 1952 and held for nine years.

During his detention, in 1959, he said he was beaten unconscious during an incident at Hola camp in which 11 other prisoners were clubbed to death.

It will now be decided whether a fair hearing is still possible.