The deeply emotional lyrics and the sorrowful and heroic score, usually sung a cappella by a male choir, turned the song into a symbol of Asturian coal mining and of mining in general.
Sometimes used as a working class anthem, the hymn was widely used during the Asturian miners uprising of 1934 and during the Spanish Civil War.
The lyrics (usually sung in Asturian, Spanish or a mixture between both languages) describe the painful returning home of a miner, covered in the blood of his fellow miners, who tells his wife (Maruxina) of a mining accident in the famous Asturian mine known as Pozu Maria Luisa (located in Ciañu, Langreo).
Coal mining, which is present in Asturias since the 18th century having a pivotal role in the historical economic activity of the region, is known as a very dangerous activity. Historically, hundreds of miners have died in the mines of Asturias and deadly mining accidents were sadly common in the miner population.
Santa Bárbara is nowadays considered to be an important piece of Asturian traditional music and is included prominently in the Asturian folk music repertoire. The song is also often used in funerals, tributes and memorials 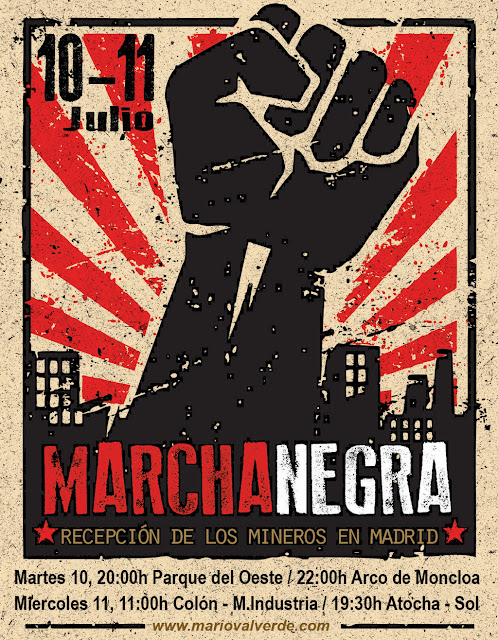 The Importance of the Miners Strike in Spain explained

“We represent the last bastion of a very well organized working class,” said Lisardo Suarez, a miner for 18 years at Maria Luisa shaft in Ciano.

Others add that the miners have long been leaders of revolts.
“We have been the spearhead of the worker’s movement throughout the 20th century when some of the workers uprisings during the dictatorship were started by us,” Robles added.
In 1962, during Franco’s dictatorship, miners dared to go on a strike to claim more labour rights and better salaries. The protests spread throughout the country and received a lot of support abroad.
With the past in mind, miners say that the government is afraid their current protest
“could act like gunpowder across the country, turning into a massive uprising by all the citizens in Spain and in Europe,”
said Juan Carlos Liebana, Comisiones Obreras union representative for the mining sector.

Thank you for your post. Mi grandad, a railway driver, used to sing Nel pozu Maria Luisa to me when I was a kid. The miners are fighting because the Spanish government do not want to honor an previous agreement which will guarantee funding for the mining areas until 2018. In Spain, like in Britain, there seems to be a bottomless money pit (pardon the pun) for banks and right wing crooks and nothing for workers. All the best from Glasgow, Dr. Ivan Cabrera