Why Operation Green Hunt will fail 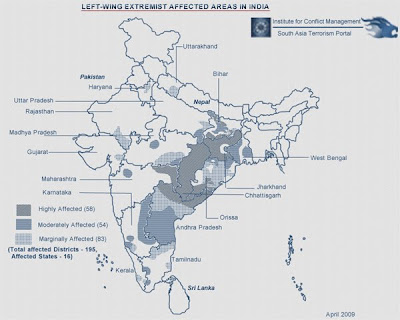 Posted by indianvanguard on October 21, 2009

The government says there is no ‘war’ against Naxals – yet it’s preparing for one. However, Operation Green Hunt is a disaster in the making. Why? Because the government has so far failed to identify the root of the Naxal problem – namely itself.

True that Chidambaram’s ambitious plan of a virtual blitzkrieg against the Naxals was pruned down by the CCS – but even in its abridged form, it’s a mobilization of massive proportions. Sample this – New Delhi is sending 27,000 troops to the Naxal-hit areas, six (or more) Mi-17 choppers will provide air support (with special forces guards on board), a special forces school and a brigade HQ to be set up in Chhattisgarh (add to this, the local state forces and specialized anti-Naxal forces who will join in). The Home Minister might not want to admit it – but the ‘war’ it’s denying is set to break out in November.

The first theatre of action is likely to be Gadchiroli in Maharashtra and Kanker in Chhattisgarh. Forces will try to push the Maoists into ‘Abuj Marh’ (literally ‘unknown jungle’ in the local dialect) area of Chhattisgarh, an old Maoist stronghold, and it’s here that Naxals are trained to this day. It’s here where the decisive battle may be fought. Now all this sounds great on paper – but the only problem is that – the forces don’t know who they are supposed to be fighting against. Since the distinction between a Maoist and a tribal is vague – the job of dealing with them becomes all the more challenging. So it brings us to three questions that must be answered by the government, before any more blood is spilt.
First Question- Will ‘Operation Green Hunt’ be successful?
Honestly the answer is a big NO. Call me a Naxal sympathizer, but like me, if you ever face the brutal wrath of the local police in heartland India – your world view will witness a paradigm shift within seconds. I was in West Bengal last July – covering the offensive launched by the state administration to counter the Naxals in Lalgarh. It was here, during one of the shoots that my cameraperson and I were chased down a road in Midnapore district by the West Bengal police and hit with sticks.

Our crime??? We had dared to shoot the police breaking down doors and hauling up village youngsters for ‘questioning’. (What happens in these ‘questionings’ I don’t need to tell you) When journalists could be treated like dogs by the police – I began to grasp the plight of the local villagers who don’t have a voice – or redressal system of any sort. The moral of the story is very simple – between the two evils of Naxalism and Police, the tribals choose the former. At least Naxals don’t rape, maim and kill without reason.

Second Question – Who started the Fire?
There is little debate that the government did; and every time we refer to the Naxals as a ‘menace’ we add credence to the theory that Naxals are some sort of alien virus that came and ravaged our picturesque countryside that was otherwise peaceful, plentiful and prosperous.

Let me make it clear, I abhor the mindless philosophy of the Naxals and their warped world view – but unlike a myopic government I also see Naxalism as a manifestation of popular discontent – created by the laxities in the system. Sadly, Naxalism has thrived because these glaring shortcomings have not been addressed.

The Home Minister says that he will follow a ‘clear and hold’ policy – which in less flashy terms – means that once the area has been cleared of Naxals, the government will provide development to the area. It’s a brilliant idea – only if it had struck the government in the course of the last 62 years, then things would not have come to such a head. It’s ironic, but the Naxal ‘menace’ may finally bring some development to these impoverished regions of India.

On my tour of Lalgarh, this is one saying that I came across time and again – “That in the night if you hold your hand to your face in this region, you would not be able to see it. It’s so dark.” This axiom actually hits home the point of how backward (or pitch dark) many regions of this nation can be. Here Sensex, Liberalization, Nuclear Deal, etc don’t mean a thing- because words like Education, Clean Water, Medicines and Property Rights are still struggling to make inroads. The mandarins in North Block need to see the abject condition of the tribals and the exploitation of the villagers in heartland India to appreciate why tribals support the Maoists.

Why would tribals armed with ancient bows and arrows want to take on the might of state and central paramilitary forces in Lalgarh and elsewhere? Either they are crazy or their levels of desperation are such that they don’t mind dying. Sadly the government thinks that the tribals must be crazy.

Third Question – What is the course of action to follow then?
Well to begin with, stop foolhardy adventurism against the Naxals. A little respect for your enemy enables you to plot a faster and more comprehensive win. For instance, the government thought (foolishly) that arming villagers against Naxals was a brilliant idea…now after years of denying it – the government admits that the Salva Judum ended up doing more harm than good. Even the NHRC notes that Judum members along with security forces were responsible for “widespread arson, rape, forced disappearances, suspect encounters and extrajudicial killings”.

Once the forces have learnt to give some respect to the lives of people – work can start to give them some fundamental rights and development too. The corrupt administration has to be revamped to usher in progress at the grassroots level. Poor governance resulted in the rise of Naxalism, that’s a fact that even the government has accepted now. End of debate.

The Tribal Bill exists only on paper – states like Jharkhand, Chhattisgarh and Madhya Pradesh have not even acted on it. When you don’t give a tribal his basic rights and tell him to stay away from the forests that he’s always depended on – you are effectively making him a Naxal sympathizer/Naxalite – it would be interesting to see how the government wants to combat this situation with FORCE.

True that these measures will take time – but then the problem was not created overnight, six decades of neglect cannot be swept away with one security sweep. The Home Minister perhaps should know this by now.

And talking about security sweep – the most decisive push against the Naxals till now had been Lalgarh. The Lalgarh experiment was even described as a success in many quarters. It certainly did not look like a success to me when I was there – and certainly doesn’t look like one when I study data coming out of the region.

- 82 people killed (of course most of them CPM cadres)
- 15 CPM offices ransacked in broad daylight
- 100 houses (again mostly of CPM cadres) ransacked / burnt
- Thousands of people chased away from their homes.

If this is the situation AFTER the security crackdown – the efficacy of force becomes only too obvious. The government should use force where it works – namely along the borders. Here it should use its head.