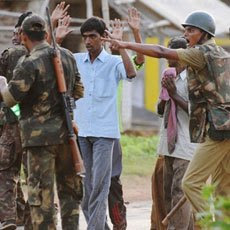 The people in India’s mineral heartland are tribals, who are the poorest of the poor, and the government’s war against India’s indigenous people is a frightening and unjust one says writer-activist Arundhati Roy.

Recently, a newspaper advertisement published by the Indian government reads “Naxalites are nothing but cold-blooded criminals”. This advertisement is part of the government’s intensified campaign to combat Naxalite activities in the country. It comes a few weeks after the Prime Minister’s declaration that Naxalite activities are the single largest threat to India’s security. Naxalites in India have repeatedly resorted to violence, and their armed campaigns have resulted in loss of life and property. Ever since 2005, India has been witness to an average of 1,500 incidents of Naxal violence, resulting in the death of over 750 people i.e. five incidents of Naxal violence every day and sixty killings every month. Naxal movement is gaining momentum with the passing time. It has spread to both urban and rural areas, ranging 160 districts of India, particularly affecting the entire eastern corridor; the states of Bihar, West Bengal, Jharkhand, Chhattisgarh, Andhra Pradesh and parts of Orissa, Kerala and Madhya Pradesh.

All this raises the suspicions that whether Naxalites are irrational people causing so much damage to life and property without any reason. In reality, Naxalites are active in the areas where the poorest of the poor live. Primary government facilities like schools and health care centers are practically absent in the Naxal infested areas. Infant mortality rates are among the highest in the world in the region, owing to malnutrition and hunger. Estimates suggest the infant mortality rate to be at 47 percent in the Naxalite affected regions of the country, a condition worse than Sub-Saharan Africa. According to ShankkerAiyar, “Each of the 80 worst Naxal affected districts have no schools, poor heath care, exploitative feudalism, no employment opportunities, pathetic social infrastructure”. Over three lakh villages have no road connectivity. For example Dantewada district of Chhattisgarh is on the list of 100 worst districts list for the past two decades. So despite well aware of the reasons that are behind the rise of Naxalism Indian government is only depending upon force to end that problem. It is paying no heed to the problems that gave rise to Naxalism. In fact in the mind of Indian administration Naxalism is a war that has to be tackled through force. It most of the time forgot that Naxals are alienated Indian citizens and once their grievances will overcome Naxal movement will come to an end.

India’s Naxal problem is complex and tends to find its justification in the deep-rooted and centuries-old exploitation of the poor, particularly the tribal community, by local landlords and corrupt politicians. There is a high incidence of crimes committed against the tribal community. These include bonded labour, rape of women and girls, and silencing any opposition or dissent by murder and other violence. The landlords who commit these evils escape prosecution and punishment due to the support of corrupt and failing state agencies like the police. The Indian government has made no attempt to reach out to these citizens and address their problems, or to prosecute those who have committed crimes. The poor are systematically denied official assistance to address issues including food security, unemployment and the depletion of natural resources. Neither the state nor the central government has attempted to identify whether official schemes such as public food distribution shops or government health services are available to people in the region.

In addition to the failure of public welfare schemes, the government is also responsible for sponsoring indiscriminate mining and the destruction of natural resources in the region all in the name of development. In Chhattisgarh for instance, several large-scale mining operations have been commissioned in the past six years with complete disregard to the life and security of community members living there. A government website highlights the state’s ‘red-carpet’ policy to private entities extracting mineral resources, but makes no mention of policies regarding people’s loss of livelihoods and displacement, or the operations’ environmental impact. It is thus clear that state governments in Naxalite affected regions have failed to address deep-rooted issues plaguing the population living below the poverty line. Hopelessly, it is this deprived and oppressed population that falls prey to the Naxalite ideology.

Government forces against the people

Repression and violence against a population forms fertile ground for rebellious ideologies. The Naxalite movement is thus made up of individuals who believe in and justify defensive violence. It is unfortunate that the response by the Indian government has also been the use of force, often brutal. However it is an established rule that violence can neither resolve problems nor be a mode of communication. Any call for violence negates the premise of rule of law. Violence presupposes guilt and perpetuates disagreement. Moreover, it affects and diminishes the space for dialogue, an essential component in any democracy

The land grab movement of Indian government in the name of development, industrialization and market-based economic activities adds to the alienation of the Naxals. Millions of common people, small and marginal farmers and Advasis and Dalits are ousted from their habitations. Rich landlords and their agents are aided and abated by the government’s police force without much attempt to rehabilitate those who are being thrown out, not to speak of any attempt to negotiate with them the terms of land transfers. Grabbing land in the name of development has been going on in India for quite some time. But over the last few years there is a new consciousness among those who are being evicted. If they get together and fight, they can resist land takeover even in the most distant tribal areas where modernity is yet to reach. A message has gone around that if they stand together and fight, which may occasionally mean killing their adversaries; they can protect their land and livelihood.

Poverty only provides a fertile ground for Naxalite grievances to grow. The National Commission for Enterprises in the Unorganized Sector (NCEUS) has established that 77 percent of Indian population lives on less than Rs 20 per day, while less than five percent of population leads an ostentatious life of luxury. This naturally infuriates people who suffer or lag behind. But that may not be sufficient for them to take up arms in protest. It is only when these poor people also suffer the worst social discrimination, such as 88 percent of Dalits and 84 percent of Muslims living in abject poverty that the protests turn violent. The only way the Naxalite problem can be resolved is by genuine negotiations and trying to provide answers to their age-old problems.
Posted by nickglais on 10/13/2009 12:23:00 PM