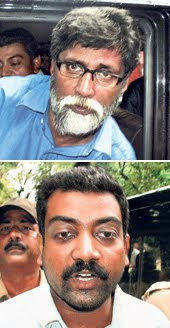 Raja Sarkhel, all Indian Executive Committee member of Revolutionary
Democratic Front (RDF) and Secretary of the West Bengal State unit and
Prasun Chatterjjee, Executive member of state unit (Gana Pratirodh
Manch) have been arrested by West Bengal police on the evening of 5th
October in Kolkata and implicated them in fabricated cases under the
Unlawful Activities (Amendment) Act 2008 by showing false links with
CPI (Maoist). The West Bengal police have claimed sources of
information regarding the supposed links of these senior people’s
activists with CPI (Maoist) based on false and fabricated confessions
supposedly obtained from Chatradhar Mahoto, the spokesperson of
People’s Committee Against Police Atrocities, who was illegally and
immorally arrested and continuously tortured under illegal police
custody.

Raja Sarkhel is a committed people’s activist for the last three
decades in West Bengal and is well-known to the people of the state
working for various mass movements including Singur, Nandigram and
Lalgarh in the recent years. Prasun Chatterjjee has been actively
working for the people’s cause for more than a decade. While Raja
Sarkhel was picked up from a street while he was returning home,
Prasun Chatterjjee was whisked away by the police from his residence
when he was taking rest after his eyes were treated in a hospital.

The arrest of these two well-known activists of our organisation has
come in the background of a vicious campaign orchestrated against the
progressive and democratic intellectuals in Kolkata by the ruling CPI
(M) leaders, the Chief Secretary, Asok Mohan Chakrabarti, the Home
Secretary, and Mr Ardhendu Sen along with a number of police
officials. Like Dr Binayak Sen who was incarcerated in Chhattisgarh by
the right-wing communal BJP government for more than 2 years for
bringing out the facts to the world outside the worst kind of
atrocities committed on the tribals by Salwa Judum, a state-run armed
mercenaries, these two selfless people’s leaders tirelessly brought
out all the details of the people’s movement of Singur, Nandigram and
Lalgarh including the worst atrocities committed against the
struggling people by the CPI(M) armed goons and the police and
paramilitary forces. This is the crime they committed.

The RDF calls upon the people of this country to defeat CPI (M)’s
fascistic witch-hunt of progressive and democratic writers, artists,
intellectuals and activists of Kolkata by raising voice of protest
collectively. It’s time for all the democratic voices to come together
firmly against the fascistic onslaught of the Indian ruling classes
represented in the Union government or the state governments like that
of CPI (M) led left front government or BJP Government in Chhattisgarh
on the revolutionary and democratic struggles in South Asia.