Let us demand an end to this hunt 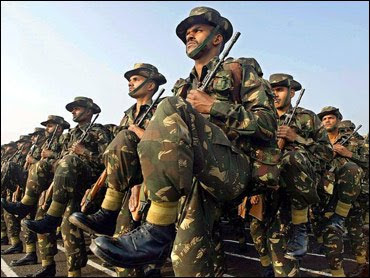 Posted by indianvanguard on October 17, 2009

Green Hunt has started. The program of elimination of Maoists that Home Minister Chidambaram said would start in September, and then postponed to November, has started in September as originally planned. Given the low reliability of reports emanating from Chhattisgarh, the numbers published by the press as to how many Cobra Soldiers have entered Dantewada district, how many battalions of paramilitary units have been sent by the Center, what kind of fatalities have been caused by the shootings on both sides, etc. might not be completely true.

With a little effort it might not be impossible to ascertain the number of soldiers involved in Green Hunt, but the same cannot be said of the number of deaths in this operation. The presence of a dead body proves death. But the authorities in Chhattisgarh take possession of the dead bodies of only their men, perform Panchnama and postmortem and hand over the bodies to the families of the dead. The bodies of Maoists and their sympathizers are often left in the forests as fodder for wild animals. This was standard practice until about a year ago; only recently and on certain occasions, it appears that some of these bodies are also being brought and Panchnama performed.

If those that have died are not armed naxalites but are in fact rural villagers, then leaving their bodies behind in the forest is the smart thing to do from the governments point of view. Even if the bodies are those of armed naxalites, the opinion in Chhattisgarhs ruling officialdom seems to be that the corpses of traitors deserve neither the usual dignities accorded to the dead, nor their labor for the performance of such dignities. In the war against the LTTE in Sri Lanka, when evidence was uncovered through the Panchnamas performed on the bodies of dead Tamils that they had been killed by torture, the government of that country ordered that bodies of Tamils could henceforth be buried without the performance of Panchnamas.

While the constitution might impede the passing of similar orders by our own governments, the Chhattisgarh government is implementing the same through unwritten orders. Newspapers are reporting that that the government of Chhattisgarh has passed orders banning media personnel from even approaching the areas of operation. Raman Singhs government seems to believe that such a restriction is necessary to obscure whether it is armed naxalites or their Adivasi followers that are hunted through Green hunt. If the media has the courage to defy this restriction, they can win.

This is because the Supreme court has declared, in the very early days of the drafting of the constitution, that freedom of the press is part of an individuals freedom of expression. This right can only be regulated within the bounds allowed by the constitution, and that too through specific enactments, but the government does not have the right to ban the media by Government Orders, without showing any reasons for the same. Not that it is possible to emerge alive after arguing about the Constitution with armed Cobras that are blocking the way, but at the very least we must know that it is illegal to place such restrictions on the media. If not, and if governments, one after the other, start placing restrictions and ban the media, then its a great loss for Democracy.

What was begun by the Left government in Lalgarh is being continued by the government in Chhattisgarh. It appears that Sri Lanka has provided inspiration in this matter as well. In the last three months of the battle against the LTTE, the Sri Lankan govt. did not let the media enter the northern part of the country. The intentions of the Sri Lankan rulers become clear when we see in the internal correspondence of United Nations officials that about 20 thousand Tamil civilians were killed during the period of this ban on the media. Sri Lanka has now been mentioned twice, but the story cant be complete without a third mention of it.

The rulers of India have gained a new courage after the fall of LTTEs army. Our rulers have also begun to believe that Peace Talks and Political Solutions are not necessary in militant political struggles, and that with firm resolve, such groups can be physically eliminated. The resolve to eliminate the Maoists, who have already been declared to be the pre-eminent threat against the countrys internal security, has thus been strengthened. Ordinary people might indeed wonder if the immorality of the ruling parties, their unfair governance, and economic systems that are perversely feeding the growth of inequalities, are in fact not greater dangers to the internal security of the country.

But what the current home minister Chidambaram, who is also the ex-finance minister and one of the architects of the countrys development policy, knows is that leaving aside the issue of internal security, Maoist presence can inhibit the attempts to extract the enormous mineral resources in the forests of Central India, and use them for development. While Maoists have not necessarily obstructed on all occasions the presence and expansion of capitalists in the areas under their dominance, the anxiety is that the fear that the Maoists might do so will inhibit capitalists from coming forward to invest in the area.

These, all together have led to the process of Maoists elimination. Chidambarams challenge (delivered without ruffling his toothpaste smile in the least), that Paramilitary units and Cobras trained in guerilla warfare will be launched in a massive fashion to physically annihilate the Maoists, is now being implemented. News trickling in about the recent Dantewada shootings reveals that the decimation of Adivasis might be the meaning behind this elimination. And the Maoists are speaking the same language as well; they are issuing a counter-challenge to the government about their own prowess.

Only the second day after Chidambarams proclamation that paramilitary units would be launched in Aabujmadh, they have killed police in large numbers in Rajnandgaon. Those that have chosen the path of armed struggle can hardly avoid fighting when warfare arrives at their door, but they must not do anything to invite a battle whilst living amidst the people. They should do whatever they can in order to prevent it. What must in fact be done can be debated extensively, but the real question is about ones attitude on the matter. Maoist leaders do not like such questions. Whose side are you on? they ask.

If you were to recognize not just political partisanship but also a partisanship of values, we could reply that we are on the side of Justice. Justice mostly lies on the side of those that are fighting for the people, but when they start prioritizing their political objectives over the welfare of the people, one cannot but call it injustice. And then there are also those that ask How long can the government remain a silent spectator? It is one thing to fight militantly for the sake of peoples needs, and it is another to launch an armed challenge to the sovereignty of the state.

Even those rulers that can tolerate the first cannot tolerate the second. They ask whether even the Maoists can be expected to behave differently should they come to power tomorrow. This is a fair question, but the only answer that can be given by advocates of democracy is that any challenge must be faced in a democratic fashion.

When the 11th planning commission, seeking a solution to this, appointed a committee of experts, they concluded that the only way to face the Maoists democratically is for the state itself to create through the use of state sovereignty whatever rights, freedoms and opportunities that people had gained through the Maoists.

There is no evidence that either Manmohan Singh or Chidambaram have read those submissions. Finally, as always, the conflicts of Dantewada district have begun to echo in Bhadrachalam district. From Chintoor to Vajod, the police are forcing the Adivasis to come to police stations, and are imprisoning them illegally, and are torturing them severely in order to commit them to the legal process.

It was only when Komuram Narasimha Rao, a resident of R.Kothagudem colony, committed suicide on the 7th of this month, out of fear of what else the police would subject him to, that the world came to know that the Police of Charla had hung him on a hook and beat him to a pulp, after they had tied up his hands and feet. One can imagine what the situation is like in Dantewada when it is like this in Kothagudem. That is why it is important that we raise our voices to demand that the government stop this hunt, just as it is necessary to ask that the Maoists behave in a manner that would put pressure on such a direction.