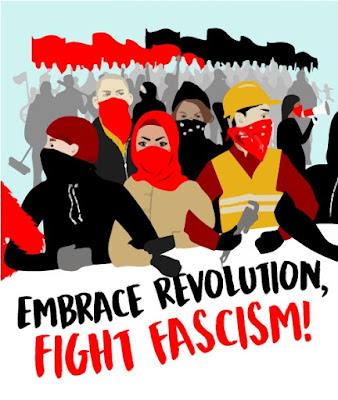 Democracy and Class Struggle says with resurgent right wing populism and fascism not just in Europe but across the world it is overdue to rectify errors of the current communist movement on the national question particularly in relation to Fascism.

Democracy and Class Struggle supports the general line of Dimitrov expressed here in 1935  despite some bad implementations of this Comintern line particularly in USA and a more successful implementation after much rectification in China.

It is important not to confuse these bad implementations of the Comintern line on Fascism with the line itself, which is clearly expressed by Dimitrov in article below.


One of the weakest aspects of the anti-fascist struggle of our Parties is that they react inadequately and too slowly to the demagogy of fascism, and to this day continue to neglect the problems of the struggle against fascist ideology.

Many comrades did not believe that so reactionary a brand of bourgeois ideology as the ideology of fascism, which in its stupidity frequently reaches the point of lunacy, would be able to gain any mass influence.

This was a serious mistake.

The putrefaction of capitalism penetrates to the innermost core of its ideology and culture, while the desperate situation of wide masses of the people renders certain sections of them susceptible to infection from the ideological refuse of this putrefaction.

Under no circumstances must we underrate fascism's power of ideological infection. On the contrary, we for our part must develop an extensive ideological struggle based on clear, popular arguments and a correct, well thought out approach to the peculiarities of the national psychology of the masses of the people.

The fascists are rummaging through the entire history of every nation so as to be able to pose as the heirs and continuators of all that was exalted and heroic in its past, while all that was degrading or offensive to the national sentiments of the people they make use of as weapons against the enemies of fascism.

Hundreds of books are being published in Germany with only one aim -- to falsify the history of the German people and give it a fascist complexion. The new-baked National Socialist historians try to depict the history of Germany as if for the past two thousand years, by virtue of some historical law, a certain line of development had run through it like a red thread, leading to the appearance on the historical scene of a national 'savior', a 'Messiah' of the German people, a certain 'Corporal' of Austrian extraction.

In these books the greatest figures of the German people of the past are represented as having been fascists, while the great peasant movements are set down as the direct precursors of the fascist movement.

Mussolini does his utmost to make capital for himself out of the heroic figure of Garibaldi. The French fascists bring to the fore as their heroine Joan of Arc. The American fascists appeal to the traditions of the American War of Independence, the traditions of Washington and Lincoln. The Bulgarian fascists make use of the national-liberation movement of the seventies and its heroes beloved by the people, Vassil Levsky, Stephan Karaj and others.

Communists who suppose that all this has nothing to do with the cause of the working class, who do nothing to enlighten the masses on the past of their people in a historically correct fashion, in a genuinely Marxist-Leninist spirit, who do nothing to link up the present struggle with the people's revolutionary traditions and past -- voluntarily hand over to the fascist falsifiers all that is valuable in the historical past of the nation, so that the fascists may fool the masses.

No, Comrades, we are concerned with every important question, not only of the present and the future, but also of the past of our own peoples. We Communists do not pursue a narrow policy based on the craft interests of the workers. We are not narrow-minded trade union functionaries, or leaders of medieval guilds of handicraftsmen and journeymen.

We are the representatives of the class interests of the most important, the greatest class of modern society-the working class, to whose destiny it falls to free mankind from the sufferings of the capitalist system, the class which in one-sixth of the world has already cast off the yoke of capitalism and constitutes the ruling class.

We defend the vital interests of all the exploited, toiling strata, that is, of the overwhelming majority in any capitalist country.

We Communists are the irreconcilable opponents, in principle, of bourgeois nationalism in all its forms.

But we are not supporters of national nihilism, and should never act as such.

The task of educating the workers and all working people in the spirit of proletarian internationalism is one of the fundamental tasks of every Communist Party. But anyone who thinks that this permits him, or even compels him, to sneer at all the national sentiments of the broad masses of working people is far from being a genuine Bolshevik, and has understood nothing of the teaching of Lenin on the national question.

Lenin, who always fought bourgeois nationalism resolutely and consistently, gave us an example of the correct approach to the problem of national sentiments in his article "On the National Pride of the Great Russians" written in 1914.

Are we class-conscious Great-Russian proletarians impervious to the feeling of national pride? Certainly not. We love our language and our motherland; we, more than any other group, are working to raise its laboring masses (i.e., nine-tenths of its population) to the level of intelligent democrats and socialists. We, more than anybody are grieved to see and feel to what violence, oppression and mockery our beautiful motherland is being subjected by the tsarist hangmen, the nobles and the capitalists. We are proud of the fact that those acts of violence met with resistance in our midst, in the midst of the Great Russians; that this midst brought forth Radischev, the Decembrists, the intellectual revolutionaries of the seventies; that in 1905 the Great-Russian working class created a powerful revolutionary party of the masses. .

We are filled with national pride because of the knowledge that the Great-Russian nation, too, has created a revolutionary class, that it, too, has proved capable of giving humanity great examples of struggle for freedom and for socialism; that its contribution is not confined solely to great pogroms, numerous scaffolds, torture chambers, severe famines and abject servility before the priests, the tsars, the landowners and the capitalists.

We are filled with national pride, and therefore we particularly hate our slavish past... and our slavish present, in which the same landowners, aided by the capitalists, lead us into war to stifle Poland and the Ukraine, to throttle the democratic movement in Persia and in China, to strengthen the gang of Romanovs, Bobrinskis, Puriskeviches that cover with shame our Great-Russian national dignity.

This is what Lenin wrote on national pride.

I think, comrades, that when at the Reichstag Fire Trial the fascists tried to slander the Bulgarians as a barbarous people, I was not wrong in taking up the defense of the national honor of the working masses of the Bulgarian people, who are struggling heroically against the fascist usurpers, the real barbarians and savages, nor was I wrong in declaring that I had no cause to be ashamed of being a Bulgarian, but that, on the contrary,

I was proud of being a son of the heroic Bulgarian working class.

Comrades, proletarian internationalism must, so to speak, "acclimatize itself" in each country in order to strike deep roots in its native land.

It goes without saying that it is necessary everywhere and on all occasions to expose before the masses and prove to them concretely that the fascist bourgeoisie, on the pretext of defending general national interests, is conducting its selfish policy of oppressing and exploiting its own people, as well as robbing and enslaving other nations. But we must not confine ourselves to this. We must at the same time prove by the very struggle of the working class and the actions of the Communist Parties that the proletariat, in rising against every manner of bondage and national oppression, is the only true fighter for national freedom and the independence of the people.

The interests of the class struggle of the proletariat against its native exploiters and oppressors are not in contradiction to the interests of a free and happy future of the nation. On the contrary, the socialist revolution will signify the salvation of the nation and will open up to it the road to loftier heights. By the very fact of building at the present time its class organizations and consolidating its positions, by the very fact of defending democratic rights and liberties against fascism, by the very fact of fighting for the overthrow of capitalism, the working class is fighting for the future of the nation.

The revolutionary proletariat is fighting to save the culture of the people, to liberate it from the shackles of decaying monopoly capitalism, from barbarous fascism, which is laying violent hands on it. Only the proletarian revolution can avert the destruction of culture and raise it to its highest flowering as a truly national culture -- national in form and socialist in content -- which is being realized in the Union of Soviet Socialist Republics before our very eyes.

Proletarian internationalism not only is not in contradiction to this struggle of the working people of the individual countries for national, social and cultural freedom, but, thanks to international proletarian solidarity and fighting unity, assures the support that is necessary for victory in this struggle. The working class in the capitalist countries can triumph only in the closest alliance with the victorious proletariat of the great Soviet Union.

Communists belonging to an oppressed, dependent nation cannot combat chauvinism successfully among the people of their own nation if they do not at the same time show in practice, in the mass movement, that they actually struggle for the liberation of their nation from the alien yoke.

And again, on the other hand, the Communists of an oppressing nation cannot do what is necessary to educate the working masses of their nation in the spirit of internationalism without waging a resolute struggle against the oppressor policy of their "own" bourgeoisie, for the right of complete self-determination for the nations kept in bondage by it

If they do not do this, they likewise do not make it easier for the working people of the oppressed nation to overcome their nationalist prejudices.

If we act in this spirit, if in all our mass work we prove convincingly that we are free of both national nihilism and bourgeois nationalism, then and only then shall we be able to wage a really successful struggle against the jingo demagogy of the fascists.


That is the reason why a correct and practical application of the Leninist national policy is of such paramount importance. It is unquestionably an essential preliminary condition for a successful struggle against chauvinism -- this main instrument of ideological influence of the fascists upon the masses.
Posted by nickglais on 3/09/2018 01:45:00 AM