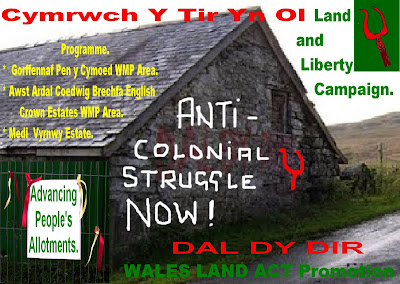 The right wing has a obsession with inward migration to Wales which it sees as the source of all problems, while always missing the main problem in Wales that of the neo liberal capitalist economy which drives many of the most able and resourceful young people into outward migration from Wales.

Wales is the second poorest country in Western Europe after Portugal with a GNP per capita that is unfavourable to that of Greece.

The focus on the immigration into Wales takes the focus away from the more fundamental question of Welsh Depopulation. It is comparable to focusing on symptoms rather than of the main cause of illness of the patient.

In Wales the problem is the terminally ill neo liberal capitalist economy and immigration is just one of its many symptoms.

The Welsh population is ageing and the productive working population is shrinking, therefore there is an urgency to fighting depopulation in Wales which none of those parties that participate in representative democracy in Wales have so far seriously addressed.

The representative parties in Wales represent themselves.This should be no surprise and was clearly seen by the early Greek Democrats thousands of years ago, which was why they favoured direct democracy over representative democracy.

It is time for a new real democracy in Wales - Direct Democracy.

The question of an ageing population and a shrinking productive population has been tackled by some capitalist economies like the Japanese by promoting inward migration and that can only contribute to a solution to the problem on a temporary basis.

We at the Great Unrest Group 2012 propose to tackle this problem by a series of economic measures to stop Welsh depopulation - a more permanent solution to the problem.

Welsh Depopulation and measures to overcome it, are at the centre of the politics of the Great Unrest Group 2012 for a

Land ownership in Wales was identified by Kevin Cahill as early as 2003 in Who Owns Britain as being one of the underlying causes of rural and urban poverty in Wales.

The Welsh Land Commission established by a Welsh Land Act would give priority to provide land for Township and Village Enterprises along the successful model of Chinese economic development.

Therefore we at the Great Unrest 2012 also call for Wales Bank Act to implement this development.

These banks would have public service mandates and be owned by the people of Wales and would not be allowed to speculate - we can learn the lessons from the Icelandic Banking collapse here to ensure a Welsh Banking system would be both transparent and accountable.

For those who think that Wales could not support its own Banking system - Iceland has its own banking system and currency with a population lower than Cardiff.

With Land and Capital in the hands of the Welsh people we have the real possiblity of regeneration of the Welsh Economy in the 21st Century.

Land and Capital should be made available to resource processing industries in rural areas rather than just seasonal tourism as a way of combating depopulation.Norway or example has high energy processing projects in the countryside which we could study.

There have been various successful schemes against depopulation in Europe but they have relied heavily on tax concessions and seasonal promotion of tourism, we want to put the emphasis on processing raw materials from Wales to lessen the historic colonial relationship with England which has seen Wales a source of raw materials to be processed in England.

We want to establish relations of equality with the English Nation and this calls for a restructuring of the economic relationship between Wales and England.We want a relationship based on mutual benefit with the working people of England not one based on an unequal colonial or imperial relationship.

With the tools of a Wales Land Act and a Wales Bank Act - Land and Capital combined with the Labour of the Welsh people would arrest Welsh national decline and start the Renaissance of a new democratic Wales - A Welsh Socialist Republic.

Wasn't sure how to send general posts to you via your site so I'm coat-tailing here. Hope you are okay.

I recently read the Occitan Serve the People statement to your Welsh group and it inspired me to surf around various regional Maoisms (using a less than accurate digital translator).

One correction to your list of links; Odio De Classe do not appear to be Basque Maoists but Cantabrian Maoists (which I understand to be a semi-Celtic region of Spain, a bit like neighbouring Astarius and Galicia). However on the Odio de Classe website there is a link to a Basque Maoist group; Kimetz http://kimetzkolektiboa.org/ Sorry if this is pedantic but it's good news in a way, as it means another org in another region of the Spanish State.

Thanks Comrade, I have amended site links in view of your comments.

Hope to see you soon.