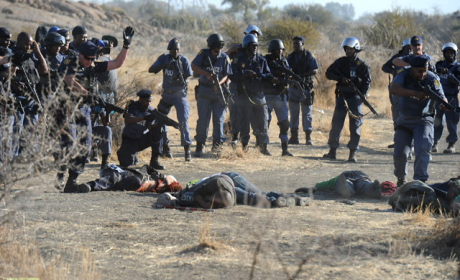 Insiders in the investigations into the shooting said post-mortem reports did not favour the police version of events - that they opened fired after being fired upon.
Instead,
“the post-mortem reports indicate that most of the people were fleeing from the police when they got killed.
“A lot of them were shot in the back and the bullets exited through their chests.
“Only a few people were found to be shot from the front,” said one of several sources, who cannot be named as they are not allowed to speak to the media.
Independent Police Investigative Directorate
(IPID) spokesman Moses Dlamini would neither confirm nor deny the contents of the post-mortem reports.
He said they would hold a briefing in Rustenburg on Monday.
Meanwhile, the Inter-Ministerial Committee (IMC) led by the Minister in the Presidency Collins Chabane has confirmed that all the post mortems were complete.
IMC spokesman Harold Maloka said the post-mortems were conducted by state pathologists and verified by independent private pathologists.