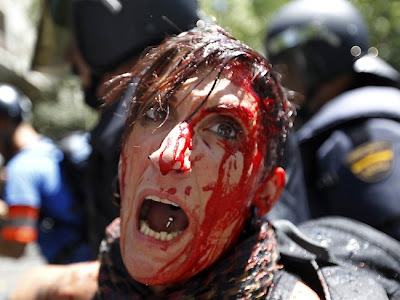 Democracy and Class Struggle has been informed that the CCOO and UGT, have called Spanish miners back to work in the regions of Aragon, León and Asturias after 67 days of strike action.

We at Democracy and Class Struggle call for ugent renewal of international support for the Spanish Miners Struggle at this critical time of betrayal by the class collaborationist Spanish Trade Unions.

All those miners who are occupying pits have been called to abandon their protest by the Trade Unions.

Democracy and Class Struggle calls for an increase in protests and actions in support of the Spanish miners worldwide.

On May 31, more than 8,000 miners went on an indefinite strike against cuts to subsidies that threaten to destroy the industry and 40,000 jobs in mining and related occupations.

On June 18, a one-day general strike received massive support, but the action was restricted by the trade unions to the mining areas in order to prevent any wider mass mobilisation against the government’s austerity measures that are improverishing tens of millions.

Then on June 22, 200 striking miners organised by the CCOO and UGT went on a 250-mile “Black March”. The sole aim of the march was to pressure the PP to honour the previous agreement with the Socialist Party (PSOE) government, which, in line with European Union had extended subsidies until 2018. On July 11, the march was welcomed by more than 25,000 people in the streets of Madrid, who then demonstrated together with the strikers. It was a sign that the miners had significant working class support despite the isolating efforts of the unions.

The ending of the strike has cleared the way for repression against striking miners who had erected barricades across roads, motorways and railways during the strike and resisted the attacks of the Guardia Civil, who used rubber bullets, tear gas, truncheons and beatings.

More than 100 strikers are currently being prosecuted. This week, five more miners were picked up by the Guardia Civil and taken into custody.