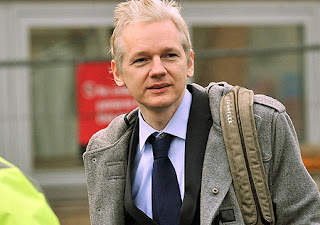 “In a communication this morning to the government of Ecuador, the UK threatened to forcefully enter the Ecuadorean embassy in London and arrest Julian Assange.
The UK claims the power to do so under the Diplomatic and Consular Premises Act 1987.
This claim is without basis.
By midnight, two hours prior to the time of this announcement, the embassy had been surrounded by police, in a menacing show of force.
Any transgression against the sanctity of the embassy is a unilateral and shameful act, and a violation of the Vienna Convention, which protects embassies worldwide.
This threat is designed to preempt Ecuador’s imminent decision on whether it will grant Julian Assange political asylum, and to bully Ecuador into a decision that is agreeable to the United Kingdom and its allies.

WikiLeaks condemns in the strongest possible terms the UK’s resort to intimidation.
A threat of this nature is a hostile and extreme act, which is not proportionate to the circumstances, and an unprecedented assault on the rights of asylum seekers worldwide.
We draw attention to the fact that the United Nations General Assembly has unanimously declared in Resolution 2312 (1967) that
“the grant of asylum. . . is a peaceful and humanitarian act and that, as such, it cannot be regarded as unfriendly by any other State.”
Pursuant to this resolution, a decision to grant asylum cannot be construed by another State as an unfriendly act. Neither can there be diplomatic consequences for granting asylum.
We remind the public that these extraordinary actions are being taken to detain a man who has not been charged with any crime in any country.
WikiLeaks joins the Government of Ecuador in urging the UK to resolve this situation according to peaceful norms of conduct.
We further urge the UK government to show restraint, and to consider the dire ramifications of any violation of the elementary norms of international law.
We ask that the UK respect Ecuador’s sovereign right to deliver a decision of its own making on Julian Assange’s asylum bid.
Noting that Ecuador has called for emergency summits of OAS and UNASUR in response to this development, WikiLeaks asks those bodies to support Ecuador’s rights in this matter, and to oppose any attempts to coerce a decision.
We note with interest that this development coincides with the UK Secretary of State William Hague’s assumption of executive responsibilities during the vacation of the Prime Minister and Deputy Prime Minister.
Mr Hague’s department, the Foreign and Commonwealth Office, has overseen the negotiations to date with Ecuador in the matter of Mr Assange’s asylum bid.
If Mr Hague has, as would be expected, approved this decision, WikiLeaks calls for his immediate resignation.”
Posted by nickglais on 8/17/2012 06:08:00 AM

Assange is a rapist. His lawyers have admitted as much. Defending wikikeaks as an organisation and opposing us/uk imperialism does not mean leftists need defend a scumbag like assange