Greece: Politicizing the struggle as the main task 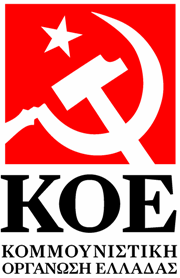 Contribution KOE to the Assisi Camp of Anti Imperialist Camp

Petros Al Achmar, Department for International Relations, KOE
After the elections we find ourselves within a new political landscape characterised by the radicalisation of the popular forces. There are four main points to be mentioned:
First of all, everything is in flux. Nothing is secure: nor the political preferences of society, neither the relationship of forces between the people and the special regime imposed by the troika despite the relieve they got from the electoral outcome.
Then there is the acceleration of the political schedules. One event precipitates the next. The privatisation of the Agricultural Bank – which mortgaged 50% of the arable land – within only one day bears witness of this pace.
Furthermore there is the total insufficiency of the new government and the entire political system in administering the crisis. To survive Samaras concentrates on attacking Syriza. Within this frame we have to put also the manifold increase of deadly attacks on migrants by the Nazi-fascists of Hrisi Avgi and their struggle against the left.

Eventually, the political struggle has taken the first stage. The popular masses now are more mature than the majority of the left as they are targeting the weak link in the chain namely the corrupt special regime. They are armed with their own experience of the struggles of the past two years. Besides their rage, they raise their demands for democracy and independence more concretely while the majority of the left has been laughing as they consider this to be reformist or “little anti-capitalist”.
For all these reasons real change (regardless of how we call it) must not be based on prefabricated schemes. Much more flexible tactics than in the past are necessary. First of all it must be open for criticism by people not coming from the left. We have to listen to the popular masses which produced and enforced the ruptures in the political scenery (and not the self-proclaimed vanguards), who “invaded” us, who introduced new forms of struggle without being linked to those vanguards.
But what is the situation within the camp of the left after the elections?
For Syriza, which succeeded because it was able – grosso modo – to express the new movement of the masses, there arises the question of the next step. Syriza must open its structures for these popular masses which is the only way to overcome the corrupt political system. The first popular assemblies of Syriza after the elections give hope as they were massively participated. The KOE does its best to contribute to this political subject around which a political and social subject can be build in order to create a new Greece within a region of Europe and Mediterranean which is changing fast.
The KKE meanwhile is offering justifications for their collapse of the type “better fewer than reformist”. For them there is an unbridgeable gap between the radicalisation of the “working class” and that of the “petit bourgeoisie” identified with the current popular mass movement. Thus the KKE is fighting this new mass movement instead of representing and organising it.
For its part Antarsya remains on the track of economicism putting the exit from the eurozone in the first line without talking about the political preconditions. They do not care about collecting the forces necessary to topple the special regime imposed by the troika.
In any case the popular masses will continue its liberation struggle against the yoke of the system imposed by the troika. They will transform their country from the state of a guinea pig to a model for the people.
18th August 2012
Posted by nickglais on 8/21/2012 09:47:00 AM