BREXIT CHAOS FOR THE RULING CLASS BY REVOLUTIONARY PRAXIS 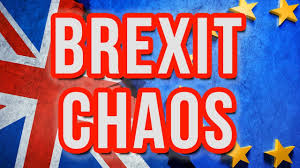 Democracy and Class Struggle is for Britain leaving the European Union and the British Union and our view is explained clearly in our article Combat Liberalism here.

Our comrades at Revolutionary Praxis have a different view on Brexit  expressed below .


The British ruling class is divided and in a chaotic state as it approaches the deadline for the exit of Britain from the European Union. Prime Minister May’s proposed ‘deal’ with the EU was predictably rejected by the House of Commons. Without a deal Britain will have to crash out of the economic and political union. The divisions over the EU run deep through the ruling class.

At one time British capitalism saw the EU as its saviour as it attempted to sustain its world position as a declining imperialist power facing the rise of US imperialism.

The French and German capitalist classes became keen to have Britain as a member due to her considerable experience in running the world through her former colonies and their “special” relationship with US imperialism.

The exit of Britain will be a loss to Franco-German imperialism and its dream of a European-centred empire.


The growing contradictions between the imperialists means that sooner or later the old alliances and certainties of the late twentieth century would be torn asunder. The European imperialists, led by the French and German imperialists, have been seeking greater independence from the USA for some time and are coming into conflict with the Russian imperialists to their east.

The British ruling class had to decide on which side of the fence to jump; to further the alliance with the US or further it with the European imperialists. The ruling class is split on this. In addition the economic collapse of 2008 has seen growing poverty, austerity and resentment among the masses all over Europe with many turning to the populist and fascist right in the absence of a genuine Communist movement.

Depending on which alliance the factions of the ruling class prefer to be in they have played on this culminating with the EU Referendum in 2016.


Cameron and company were shocked and horrified by the result; a rejection of his call to remain in the EU which he arrogantly believed would carry the day. The ruling class has since used the referendum result to create divisions among the people. Referendums can never be a true representation of the complex problems facing the mass of the people or be a genuine means of democratic expression as they usually pose very simple questions which can be interpreted in many different ways. It is a tactic which was regularly employed by fascist regimes to bolster their legitimacy. The referendum was a con trick on the British people.

The deep longing for some democratic participation among the people means the inability to carry through what was wrongly posed as a simple question leaves many feeling even more alienated from the political system.

The EU political establishment and its bureaucracy for its part will not tolerate any attempt to weaken its power, a power which is steadily unravelling in the age of austerity, wars, refugee crises and growing imperialist contradictions.


The majority of Britain’s ruling class it appears do not really want to exit the EU or at least the free market and customs union which has allowed them to increase the division of labour across borders and facilitate the production and distribution of commodities and financial transactions.

There is a very reactionary section of the ruling class who would prefer an alliance with the USA instead and promote the glory and nostalgia for the early British empire in its colonial period. The latter section of the ruling class are the section which would prepare the grounds for economic protectionism and war along with a desire to use Britain as a huge tax haven just as its remaining colonies currently operate; Jersey, Bermuda, Cayman Islands and the Virgin Islands. This is their only answer to strengthening the British economy, in their interests of course.

They do not desire to invest in manufacturing but wish to continue in property and finance as they have for decades. British finance capital has long had the upper hand over industrial capital and it is not likely that this will change. The victory of Trump in the US has scuppered their plans to gain a trade deal with the US so now they have their knickers in a twist!

In a situation like this they would no doubt allow US firms direct access to services such as the NHS if it could get them a deal. Some leftists seriously believe that exiting the EU will make it possible to bring about socialism. This is a fairy tale. Brexit will either mean a close trade agreement with US imperialism, protectionism for British monopolies and Britain as a tax haven, Revolution is the only path to socialism.


The ruling class represented by the Labour Party and Liberal Democrats are pushing for the retention of the customs union or a second referendum. The later would only increase division and bolster the fascist right. The ruling class is split as never before, More disturbingly however are their plans to break any resistance to potential difficulties resulting from a no deal Brexit. They are determined not to tolerate any unrest if the situation regarding basic commodities such as food and medicines becomes desperate. The London Evening Standard of 17th January reported that the army was placing 3,500 regular and reserve troops on standby ready for deployment at key economic, security and welfare centres of the UK in response to ‘no deal threats’ to ‘economic stability’.

The Ministry of Transport and the Home Office have already had military officers sent in to oversee the work there. The British state is now clearly tightening its grip as the crisis deepens. In any capitalist state, even a ‘democratic’ one, the military is the backbone and will always step forward in some form or other when the ruling class politicians are unable to rule effectively. May is already inviting other opposition MP’s to talks to try and gain some sort of authority over a Parliament she cannot command now that the Tory party has deserted her in droves.

The contradictions in the British ruling class are only a prelude to the greater contradictions which will engulf the world’s ruling classes in the next few years bringing the threat of another imperialist war to the forefront again.


A TIME OF DANGER AND OPPORTUNITY


The British ruling class are in a mess and this is clearly apparent to the people. Although we are threatened by the chaos being brought about by their incompetence, this also provides opportunities for the working class and middle strata to get organised and hit back at these exploiting parasites.


“There is great disorder under heaven and the situation is excellent!”