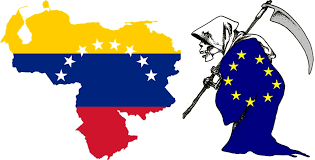 The Arrogance of European Imperialists towards Venezuela knows no bounds

Warnings from Germany, France and Spain to recognize the self-proclaimed president of Venezuela unless new elections are held came at the same time and were even similarly worded, Russia’s FM spokesperson noted.

“The statements are not simply identical but they are even made simultaneously,” Foreign Ministry spokeswoman, Maria Zakharova, wrote on Facebook.

Earlier on Saturday, Paris, Berlin and Madrid announced their readiness to recognize the self-proclaimed “interim president” of Venezuela, Juan Guaido, unless the country holds snap presidential elections within eight days.

The messages appeared to be well-coordinated indeed.

The ultimatum was almost instantly echoed by French President Emmanuel Macron, who took to Twitter issuing a similar threat in French and Spanish – to get the message through, apparently.