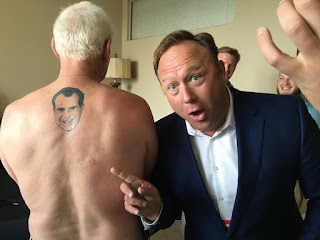 Alex Jones a friend Roger Stone and a Trump longtime friend and right wing John Bircher for the high jump - could not happen to a more deserving fiend.

President Donald Trump's longtime friend and veteran political operative Roger Stone has been indicted on seven counts, including one count of obstruction of an official proceeding, five counts of false statements and one count of witness tampering in special counsel Robert Mueller’s probe into possible collusion between Russia and the Trump campaign during the 2016 presidential election.

Stone was arrested and is expected in court in Fort Lauderdale, Florida, later Friday. The indictment was filed on Thursday.

Democracy and Class Struggle says Roger Stone is an anti communist Joseph McCarthy inspired piece of shit who calls himself a Libertarian  - is hosted by his own petard of a lifetime of dirty works.