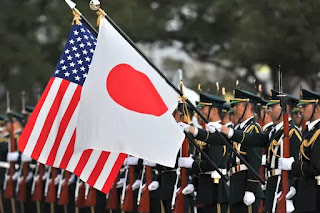 Democracy and Class Struggle says sometimes the obvious escapes people, the DPRK developed its nuclear weapons because of the nuclear blackmail and threats from the US, including these annual war games which are simulated plans to invade North Korea and kill its leadership -  if that threat was removed permanently then a discussion of a Nuclear Free Korean Peninsula becomes a possibility - with their continuation there will be no prospect of peace let alone future de- nuclearisation,

Seize the Time South Korea - Give Peace a Chance

The United States and Japan are currently conducting joint military exercises even as the Winter Olympics are still ongoing. The dock landing ship USS Rushmore, with elements of the U.S. 11th Marine Expeditionary Unit and the Japan Ground Self-Defense Force (SDF),concluded five days of amphibious landing exercises off the Southern California coast on February 7.

The annual Cope North exercise, involving more than 100 aircraft and 2,850 personnel of the U.S. Air Force, Marine Corps and Navy, as well as the Japan Air Self-Defense Force and the Royal Australian Air Force, began on February 14 and will take place in Guam and the Commonwealth of the Northern Mariana Islands through March 2. The Japanese Maritime Self-Defense Force and the US Navy will also hold a four-day computer-simulated joint missile defense drill on board Aegis destroyers starting February 16.

Key Resolve Foal Eagle, the joint US-ROK war games that happen every year in the Spring have been delayed this year due to the Olympics but are scheduled to resume in April. Ulchi Freedom Guardian, another massive joint military exercise, is scheduled for August. These exercises are offensive war games. Last year’s Foal Eagle involved 300,000 South Korean and 15,000 US troops, including the notorious SEAL Team six, the unit that assassinated Osama Bin Laden. It also involved B-1B and B-52 nuclear bombers, F22 and F35 stealth fighters, as well as an aircraft carrier and a nuclear submarine. These exercises rehearse OPLAN 5015, a war plan that includes special forces assassinations, contingencies for North Korea’s regime collapse, preemptive strikes, and the so-called Korea Massive Punishment & Retaliation (KMPR) battle plan, which involves surgical strikes against key North Korean leadership figures and military infrastructure.

The upcoming military exercises pose the greatest obstacle to efforts for peace and North-South reconciliation in the current moment.

If they move ahead as planned, North Korea will almost certainly respond by resuming nuclear and/or ballistic missile tests.

Moving forward with the joint war games, in other words, is the surest way to undermine the process of detente that has begun between the North and South through their Olympic cooperation.

A North-South summit that can pave the way for talks between the United States and North Korea is our only chance at peace on the Korean peninsula. It is essential, therefore, for those who desire genuine peace in Korea to raise a unified voice urging the White House and the Pentagon to halt the provocative joint war games and support the Korean initiative for dialogue. Let us nurture the seed sowed in PyeongChang to take root for lasting peace.