The Syrian government forces have yet to enter the Afrin region, despite previous reports by members of the National Defense Forces (NDF) via social media. 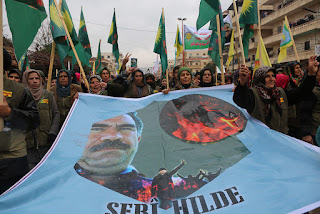 BEIRUT, LEBANON (9:45 P.M.) – The Syrian government forces have yet to enter the Afrin region, despite previous reports by members of the National Defense Forces (NDF) via social media.
According to a military source in Aleppo, the Syrian government forces have remained at the towns of Al-Zahra’a and Nubl near the Afrin axis; however, they have not received orders to enter.

The source added that the only forces to enter Afrin from the government territories were members of the YPG from the Sheikh Maqsoud District of Aleppo city.

It appears the main issue blocking the government troops from entering Afrin is the agreed upon terms between Damascus and the YPG/PYD.

The YPG/PYD are not in favor of handing over their heavy weapons to the Syrian government, which would ultimately make Afrin under Damascus’ control.

For the Syrian government, the only way they will approve of their forces entering Afrin is to have the YPG surrender their heavy weapons.