India : ‘After falling in love, I saw the reality of caste’: E. Ilavarasan 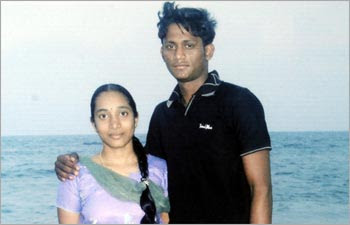 Dalit youth E. ILAVARASAN, whose marriage to a Vanniyar girl had resulted in caste violence in Tamil Nadu last year, was found dead on a railway track .


Given below is an interview Ilavarasan gave to KAVIN MALAR and was published in the Tamil edition of India Today magazine.


This translation is by PRAKASH VENKATESAN.

Did you realise you were going to be in the headlines in TN when you got married?
No. Certainly not. I thought ours would be just like any other marriage. Divya thought so too. We thought they (Divya’s parents) would be angry initially but can be eventually reconciled. We simply did not expect these things would happen. I now can really understand the horrendous nature of caste and the heinous things it is capable of after falling in love.
Why do you think Divya is suddenly saying now that she wants to go with her mother?
Someone is operating behind the scenes. They have threatened that her mother’s life and mine would be in danger if Divya does not return back. Probably that is why she has taken such a decision. She can’t live without me. She won’t be able to take this three weeks separation. She used to tell me often that she can’t live without me even for an hour. The plan to separate us was plotted in PMK’s head office. Now they have executed it.
Did you and Divya had any problems after your marriage?
No. We were happy. Though we were running from place to place in fear, we were quite happy to be together.
When did the marriage happen?
I was on my way to Trichy for a football match. When I was in Omalur, I got a call from Divya saying that people in her house are trying to get her married to someone else. She asked me to take her with me. We went to Andhra Pradesh and got married there.
How is the relationship between you and Divya’s parents? 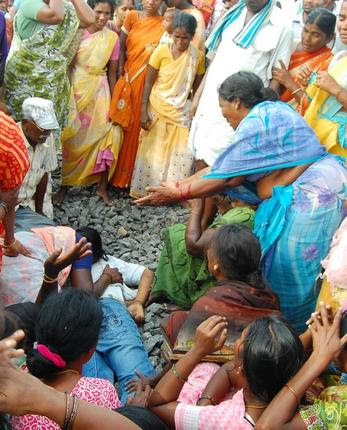 Ilavarasan found dead on railway tracks yesterday.Photo by N Bashkaran / The Hindu
Divya’s father was a good person. He was indifferent to caste. We still don’t believe he committed suicide because of our marriage. Divya’s mother, she was not that opposing either. After our marriage her brothers are not talking to her. But people around her are instigating her. They knew that I was going to get an appointment order to join the police force and filed a case against me and deliberately made efforts against it to get the order cancelled. These were not done by her mother. She is being compelled by people of her caste to do these deeds
How did you feel when three Dalit villages were burnt in Dharmapuri?
Guilty. We even thought about committing suicide. Not even in our dreams we thought her father would commit suicide. She was deeply affected by her father’s death. She cried a lot.
We can not forget that November 7th. People from her side said they want to meet Divya and take her back with them. I told them it is certainly possible to talk. In November 7th, a meeting was arranged between both the sides in Thoppur. Her father was not present there. Divya’s mother asked her to return back but Divya firmly refused. Half an hour after the meeting we got the news of her father’s suicide and villages being burnt. We saw it in TV. The caste in which I was born into is their problem. People who are capable of doing these deeds can go to any extent.
What are you going to do to get Divya back?
I will keep on fighting. Authorities know who burnt three villages. But they have not taken any action. They have to. They have to publicly announce where Divya is. They have to investigate and publicly announce about the people who are directly and indirectly trying to separate us. The decision to be separated would not have been from her heart. I want to talk with Divya first. After that, am quite certain everything would be okay.
Posted by nickglais on 7/18/2013 01:48:00 AM