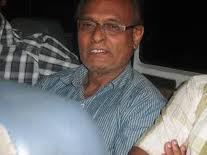 A cowardly attempt was made late this afternoon in Nellore on the life of the Vice President of Revolutionary Democratic Front, Comrade Ganti Prasadam, a popular revolutionary mass leader, by a 3-member state-appointed gang of vigilantes with hunting swords and a pistol. He is being operated upon in a hospital at Nellore; doctors were last reported to be still trying to remove a third bullet. His condition is extremely critical at the moment. Let us join in condemning this dastardly attack!

Democracy and Class Struggle calls for solidarity with Comrade Granti Prasadam and demand that the State appointed vigilantes be brought to justice immediately.

Our heart goes out to Comrade Ganti Prasadam and we wish him strength to survive this attack.

Comrade Ganti Prasadam, the All India Vice-President of Revolutionary Democratic Front was brutally and fatally attacked by some unidentified gunmen in Nellore town today in the afternoon. The attackers first slew him on his neck with hunting sickles and then shot at him with a pistol three rounds. Comrade Ganti Prasadam is critically injured in the assassination attempt and at present he is being operated in a hospital in Nellore.

According to the doctors who are working on him, his condition is extremely critical. Comrade Prasadam has been also serving on the Committee for the Relatives and Friends of Martyrs as an Executive Member. He arrived at Nellore today to attend a public meeting of the Martyrs’ Committee, which is being held every year on 4 July remembering the Martyrs of Nellore. After the meeting, accompanied by three other members of the Committee he went to visit a family member of a martyr, who was hospitalised in a local Government Hospital. An assassination team of three were in waiting to swoop on him when he came out of the Hospital.

In flash of a second they attacked Comrade Ganti Prasadam, before the other comrades realised of what was happening. When they tried to catch hold of murderous gang, they ran away leaving the swords behind. Two bullets have been removed from his body so far in hours-long operation. The doctors have been maintaining that they cannot give any assurance of his safety till they could remove the third bullet, which has entered in a critical position near spinal card. RDF believes that the assassination attempt on our Vice-President is designed and carried out by none other than the state intelligence agencies in charge of anti-Maoist operations in Andhra Pradesh.

The state has clearly involved in the murderous attack, as Comrade Prasadam could not be cowed down by a huge number of cases fabricated on him apart from incarcerating him in prisons from time to time. The state government banned our organisation soon after the first Conference of RDF in Hyderabad in April 2011, in which Comrade Prasadam was elected as all India Vice-President. RDF condemns this assassination attempt in strongest terms and appeals all democratic organisations and individuals to join us in these moments of grief and sorrow, and condemn the attack and its conspirators in unequivocal terms.

The Government of Andhra Pradesh is directly responsible for the attack. In Andhra Pradesh, such attacks of assassination of people’s political, social and civil rights activists have been not uncommon in the past 40 years. Dr. Ramanadham, Purushottam, Azam Ali, Belli Lalita are a few dedicated people’s leaders and civil rights activists who were targetted by the state in Andhra Pradesh in the past. History has proved that such attacks on people’s activists in the past never brought an end to the people’s movement. In fact the mass resistance movement of people in Andhra, Telanagan and in the entire subcontinent is on the rise in the recent months and is going to engulf the anti-people pro-imperialist comprador ruling classes along with their reactionary counterparts in rural regions.

An injury to one is an injury to all but, near the anniversary of bloody murder of Azad who was on a peace negotiation, killing this comrade will be dealt with beyound verbal condemnation.

Near two years after killing Kishenji the founder of Salwa Judum and some other feudal/compradore bureaucrats were eradicated by same people's guerrilla he had founded.

Long Live People's War In India and the World!