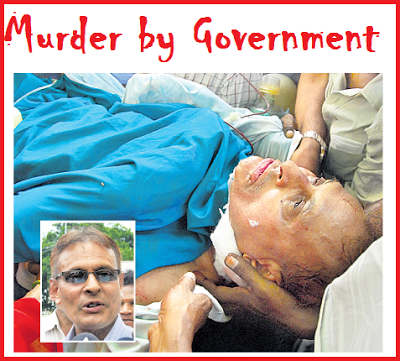 COMMITTEE FOR
THE RELEASE OF POLITICAL PRISONERS
185/3, FOURTH FLOOR, ZAKIR NAGAR, NEW DELHI-110025
05/07/2013
Condemn Strongly the Ghastly Murder of Ganti Prasadam, the Vice President of RDF by State-Sponsored Vigilante Gangs!
Constitute Immediately a Judicial Inquiry into the Killing of Ganti Prasadam by Vigilante Goons!
Ganti Prasadam, the All India Vice-President of Revolutionary Democratic Front (RDF) as well as the Executive Member of the Committee for the Relatives and Friends of Martyrs, succumbed to the brutal and fatal attack on 5 July 2013 on him by unidentified gunmen in Nellore town. He was fatally wounded on his his neck with hunting sickles and later shot at with a pistol on the 4th afternoon. Comrade Ganti Prasadam was at Nellore to attend a public meeting of the Martyrs’ Committee held every year to remember the martyrs of Nellore. He bacame the target of the waiting goons when after the meeting, along with three of his associates of the committee he was on to visit one of the ailing relatives of a martyr at a local hospital.
Ganti Prasadam was operated on after receiving bullet injuries and the doctors were trying in vain to remove the third bullet which was dangerously close to his spinal cord. Comrade Ganti Prasadam this time could not sustain his arduous struggle to keep up his breath.
Given the notorious anti-people track-record of the intelligence agencies in Andhra Pradesh which have resorted to the worst kinds of atrocities on the struggling oppressed people of the region, be it naxalites, adivasis, dalits or Muslims, this murderous operation is reminiscent to the dastardly assassination of people’s political, social and civil rights activists in the past 40 years. Dr. Ramanadham, Purushottam, Jappa Laxmana Reddy, Prabhakar Reddy, Kanakachari, Azam Ali, Belli Lalita are a few examples of dedicated people’s leaders and civil rights activists targetted by the state in Andhra Pradesh in the past. The state government cannot shy away from this glaring fact. All of us are witness to the heinous and pre-meditated ways in which the intelligence agencies of Andhra Pradesh have criminalised and specifically targeted the Muslim youth and their leadership. Specific targeting and criminalising the leading activists of the Telangana movement through false cases and incarceration is also before us. All these desperate designs of the state has never deterred the people of the region from raising their voices for their genuine and just demands.
Comrade Prasadam represented this spirit of the people of Andhra Pradesh as he, despite being incarcerated several times behind bars with trumped up cases was one of the tireless voices who became part of every meetings and demonstrations demanding the unconditional release of all political prisoners. While being in the prison in Orissa, he went on a hunger strike demanding the release of all political prsioners in the prisons of Orissa, mostly adivasis, dalits and people working against all kinds of displacement that had gripped the rural areas of Orissa. Any form of dissent in Orissa in these times are deemed ‘unlawful’ and hence to be tried under the worst kind of dracnian laws. As part of further crimialising any kind of political mobilisation that makes a scathing indictment of the anti-people policies of Liberalisation-Privatisation-Globalisation, the Andhra Pradesh government have banned the RDF in which Ganti Prasadam was elected as all India Vice-President.
CRPP is one with all progressive and democratic forces to condemn the assassination of Com. Ganti Prasadam. It is important at this juncture to see through the desperate designs of the state and its murderous, lawless agencies—all terrifed with the deepening economic crisis and the ravages that it has created among the powers that be along with the increasing resentment of the people against the dog-eat-policies of the governement—to somehow browbeat the toiling masses of the people into submission. What is of utmost significance is to join hands to defeat such evil designs of the state by once again intensifying our resolve to fight against all anti-people laws, anti-people policies, and the increasing tendencies of the Indian state and their representatives in the Andhra Pradesh government to criminalise all forms of dissent of the people for their struggle for a better future free from all forms of exploitation and oppression. We at the CRPP demand that a judicial inquiry be constituted immediaely into the assassination of Com. Ganti Prasadam and the culprits be brought to book without delay. Only the vigilant masses and their fearless resistance against all anti-people policies and the increasing fascisation of the state can ensure that such evil designs of the state be checked.
In Solidarity,
SAR Geelani
President
Amit Bhattacharyya
Secretary General
Bojja Tarakam
President AP Chapter
Balla Ravindranath
Secretary, AP Chapter
Rona Wilson
Secretary Public Relations
Democracy and Class Struggle  Justice for Ganti Prasadam, natural justice - social justice call it what you will the justice that people recognise and want, one of India's best sons has been murdered by his own government and his murders roam free.