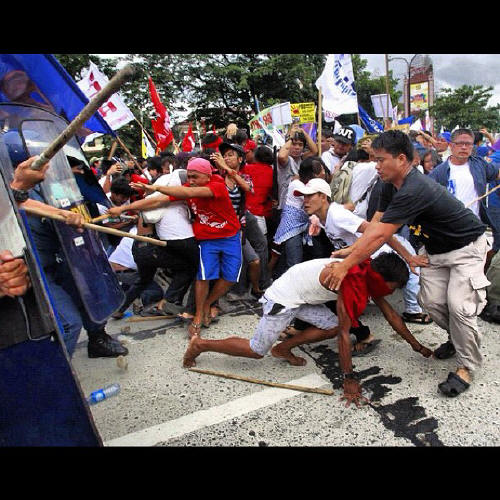 The Communist Party of the Philippines (CPP) condemned the Aquino regime and its police forces for brutally attacking demonstrators to prevent them from marching towards the Batasang Pambansa where Benigno Aquino III was set to deliver his state of the nation address at the opening of the Philippine congress.

At least 20,000 workers, peasants, students, urban poor, women and other sectors marched in the streets leading to the Batasan building in order to voice out their grievances and air their demands for jobs, higher wages, land reform, higher social spending, a stop to privatization schemes, an end to spiraling prices of oil and basic commodities and a stop to corruption under the Aquino regime.

"The CPP denounces the Aquino regime for employing Marcosian tactics of suppression against the people's democratic rights in the vain attempt to prevent them from effectively voicing out their demands," said the CPP. "

The Aquino regime carried out a series of measures to stop the demonstrations, including the denial of a 'permit' to hold a demonstration at the Batasang Pambansa, setting up police and military checkpoints in Cavite, Laguna, Batangas, Rizal, Bulacan and other nearby provinces where participants where held at bay and prevented from proceeding to Quezon City, setting up road blocks and barriers at the highway leading to the Batasang Pambansa and the deployment of at least 5,000 police personnel to block the roads and prevent marchers from advancing."

Scores of demonstrators were injured when truncheon-wielding policemen mercilessly swung at demonstrators who where trying to bypass the police barricades. At least 40 rallyists, including students, the elderly, women and workers were reported to have been hospitalized or provided emergency medical treatment. "

Aquino is acting more and more like the old dictator Marcos and all succeeding oppressive regimes in employing the full force of the police and military to prevent organizations of the toiling masses to demonstrate in the streets," pointed out the CPP.

"The CPP denounces Aquino's media officials, spinmeisters and yellow media managers for disparaging the anti-Aquino mass demonstrations by highlighting and blaming the rallies for the traffic jam (actually caused by the police roadblocks and barricades) in order to draw attention away from the fact that the people's basic right to assemble and demonstrate were being violated openly and with impunity." "

It is unfortunate that some news reporters made such a big fuss of the fact that some demonstrators threw a few water bottles and a rock or two at the police, but did not seem to mind that hundreds of truncheon-wielding policemen were swinging left and right at the bare heads of demonstrators or that demonstrators who were picked up by the police were being mandhandled and treated like criminals."
Posted by nickglais on 7/24/2013 03:03:00 PM