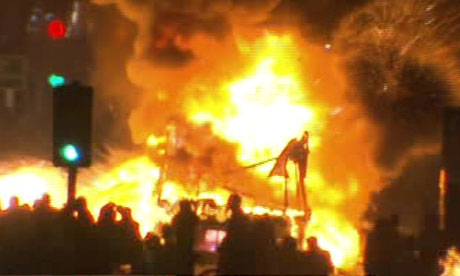 The protest organised against the Police  machine gun  killing of a father of six Mark Duggan in a Taxi by the Metropolitan Police in Tottenham exploded when Police adopted aggressive tactics against the protestors in particular a 16 year old girl.

Two police cars, a bus and ­several shops were attacked and set ablaze on Saturday night as Tottenham expolded following a protest demanding justice over a fatal police shooting.

Officers on horseback and others in riot gear clashed with hundreds of protestors armed with makeshift missiles in the centre of Tottenham after Mark Duggan, 29, a father of six was killed on Thursday.

This explosion in Tottenham against the police shoot to kill policy follows on from the death of Smiley Culture and the shooting of Charles de Menendez and the death of over 300 prisoners in police custody in the last 10 years.

The recent brutal government cuts in Tottenham have seen 75 per cent cut in youth services after a cut of 41 million pounds in the council's budget have contributed to creating this social explosion.

The cuts in one of London's poorest boroughs and aggressive policing resulting in death are signs of what is to come if the current government course is continued.