The Meaning of the Riots by Roshan Kissoon 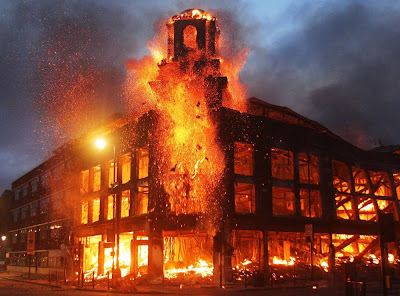 Democracy and Class Struggle is pleased to publish the thoughts of Comrade Kissoon on the Uprising in Britain.

The riots in England recently have shocked the country; and quite rightly; for they are a warning of what will come. All the drivel about one happy country united in celebration over the royal wedding has been blasted away.

The slaying of Mark Duggan by the shot of a policeman in Tottenham was the spark, the riots were the fire. The light from the fire revealed the society in a somewhat unusual light; a snapshot of Britain from a strange angle sent around the world. Let me explain:

1) Riots and looting are not supposed to happen in first world countries. Riots are only supposed to take place in third world countries. Riots in the UK and France signal that first world societies are changing toward something more traditional, more akin to the 19th century ‘Victorian’ social model, more akin to societies in the third world. That is: an openly class divided society, with educated wealthy elite, and an uneducated poor majority.

2) For instance, in most third world countries, as in pre-WW2 Britain, higher education is only for the wealthy and the elite; it is not for all. In the New Britain, it seems higher education will again be just for the wealthy and the elite. The post-war European ‘social democratic model’ is collapsing and, it seems, we are reverting to an earlier social model; this is the meaning of ‘the cuts’; viewed from another angle, it is the loss of certain ‘first world privileges’.

3) It is getting somewhat unbelievable that we really live in a democracy and that voting for one party or another will make much difference. I will not seek to prove this, but only say that is what people feel. No silly gimmicks such as online voting will make any difference, when all the parties are, at bottom, the same. There is no popular confidence in the ‘democracy’ the UK is exporting around the world at gunpoint.

4) A creeping authoritarianism has overtaken the country; we seem to be subconsciously sliding into a particularly British and peculiarly technological kind of police state (Alan Moore’s ‘V for Vendetta’ comic book captures this perfectly). I do not say we are there yet, but to get to a police state from a ‘normal’ liberal democratic state is not a quick affair. It takes a number of steps -let us say seven steps-and we are perhaps on the third step.

5) Consider: In Cardiff, the Anarchist group was infiltrated by an undercover policeman; a sinister government agency called ‘Prevent’ spies on refugee and Muslim communities; every mile of London is under 24/7 CCTV surveillance; armed police wander around London with dogs ready to ‘stop and search’ anyone who may look suspicious, a disproportionate number of whom are young black men. In the university, lecturers and academic staff are supposed to be on the lookout for ‘extremists’; the Metropolitan police is asking people to report Anarchists to the police. There are even plans for the police to use unmanned ‘drone’ spy planes, as used in Afghanistan, over mainland Britain. And who knows what kinds of cyber spying takes place? Everything is already set up for a police state; just a few more steps...

6) These steps have been justified by the threat of terrorism. The reverse side of unpopular foreign wars is the popular loss of civil liberties. A wise man said: “A nation that oppresses another is itself not free.”

7) The society preaches consumerism and the acquisition of material goods as the highest good, and is shocked when some people try to acquire those goods without paying for them. The people are drenched in consumerist propaganda from an extremely early age, young children know advertising jingles before they even know the alphabet or the times table.

9) Since Thatcher, the society has been depoliticised and atomised to an alarming degree. People are not taught to think politically; there is no sense of community. This is the difference between the UK and other European societies such as Greece, where everyone seems intensely political. So we should not be surprised that a revolt of the young will have no political ideology. However, without a coherent political ideology, without any clear demands, the rioters are not able to state why they rioted and what they want; politicians can interpret the riots in ways that suit their interests. The interpretation of the riots, what they mean for the country, is therefore also a struggle of conflicting interpretations made by left and right wing commentators and pundits, because the rioters themselves have not been able to articulate coherent demands.

10) The now open class divisions in society should allow the radical left to widen its sphere of influence and become a real force in British politics. But only if it can get its act together.

Clear article free of hackneyed left wing jargon ubiquitous in left literature.
The last point is somewhat revealing of the authors convictions about his fellow travellers; a false consciousness as I see, to believe in a 'radical' left that is detached from common lot and also somehow from ongoing transformations all around the world, who would rise from its deathbed whence it finds its act together and be reborn to fight the last battle to beat the evil empire.