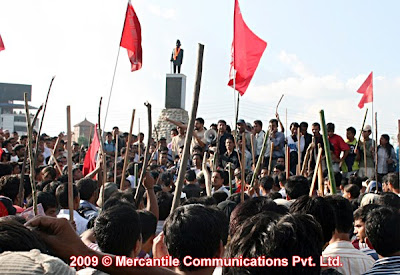 The ongoing Central Committee (CC) meeting of the UCPN (Maoist) being held at its headquarters in Parisdanda, Koteshwore reached to this conclusion after reviewing the past agitation carried out by the party.

During the meeting the Maoist CC members also discussed strategies they need to adopt in future protest programmes waged by the party.

The latest political situation of the country and the numerous round of meetings that have taken place between the political parties to reach a consensus also featured during the CC meeting, the party's spokesperson Krishna Bahadur Mahara said after the meeting.

Mahara further said that his party is committed to find a way out to the current political impasse and that the ruling Nepali Congress (NC) and CPN-UML should also exercise maximum flexibility for the same.

He also said that there will be 'high-level meetings' between the main political parties before the Dashain festivals to end the political deadlock, and warned that if the parties fail to clear away their differences then Maoists will have no option but to continue with their protest programmes.

Dahal and other Maoist leaders have been saying publicly that the current UML-led government will soon fall and be replaced by a 'national consensus' government led by their party.