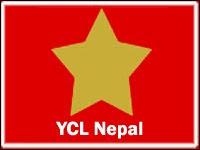 Posted by Member-WPRM (Britain) WPRM (Britain and Ireland) activists recently interviewed the Maoist CC member and in charge of the YCL in Kathmandu. Coming at a time when little positive is known about the role of the YCL in Nepali politics, especially after the PLA has been restrained in cantonments, we tried to find out how the YCL is involved in work amongst the masses and how it is fighting for a new state power. Below is the transcript of the interview.WPRM: Can you introduce yourself please?
Com. Sonam: My name is Sonam. I am a politburo member of the Unified Communist Party of Nepal (Maoist) and am in-charge of the Young Communist League (YCL).

WPRM: The YCL is often charged with terrorist activities by the Nepali as well as the western media, can you explain to us the activities of the organisation and the role it plays in Nepali politics and society today?

Com. Sonam: When the YCL was founded it was based on four principles: to defend and propagate the party line, to politicise the masses on the basis of Marxism-Leninism-Maoism (MLM), to fight for proletarian state power, and lastly to serve the people. This organisation is a political, militant mass organisation. Previously we had an understanding with other political parties which is reflected in the Comprehensive Peace Agreement (CPA). The YCL is committed to implement this understanding and to make the other side implement this too. This is a politically contentious issue. We are trying to develop a state based on MLM and we want to demolish the current state. Those people with old ideas who want to maintain the status-quo will obviously oppose our organisation. Because we are fighting for the interests of the majority of the people, the majority of the people support us. A minority of the reactionaries who exploit this country oppose us.

We have been an obstruction for reactionary interests. In order to maintain the exploitation and oppression they propagate that the YCL is a terrorist organisation. But we have taken up many important activities. First of all, we are safeguarding our border from east to west. We have an open border with India and there have been encroachments by India recently. Secondly, in the cities we widen streets because, as you have seen, in Kathmandu the roads are very narrow. We also collect rubbish and plant trees. Lastly, we carry out actions against anti-people elements, such as drug dealers, rapists, and corrupt people in business and politics. We also help drug addicts overcome their addictions.

The comprador bourgeoisie and buearacrat capitalists are the main targets of the YCL. The YCL is being defamed in their class interests. We feel we have been lacking in propagating the positive aspects of the YCL. Only the negative aspects from a reactionary angle have been propagated. Therefore there has been some confusion in the international community about the YCL. Now we have taken up a policy that the YCL will work to defend national sovereignty and territorial integrity and implement the People’s Federal Democratic Republic, the tactic of our party. The YCL will fight to establish this.

WPRM: How large is the YCL and what is its proportion of women, nationalities and dalits?
Com. Sonam: Regular whole-timer activists all over Nepal number 6000. Irregular and part-time activists number one lakh (100,000). Women make up only 25% of the organisation because most women work with the women’s organisation. Our YCL includes members of all nationalities and castes but in areas where there is a large nationality then those people will be more numerous. YCL members must be between the ages of 16-40. Some of our members only work in the YCL but others are members of different organisations such as women’s, national or student organisations.

WPRM: How does the YCL practice the mass line?

Com. Sonam: Basically the YCL has been taking up the mass line as Mao put forward under the slogan ‘grasp revolution, promote production’. This has been one of the guiding lines of our party. Practicing MLM we live among the masses and serve the people. This is our general understanding of the mass line, to be integrated with the masses. The state spends money and wastes it, so it is the YCL carrying out social welfare projects. Therefore the people have a high regard for the YCL. The revolutionary process is the overthrow of one state by another. Because we are also practicing a kind of state, not a full state but a kind of state, it is our duty to carry out these projects. This is a kind of state practice, the practice of an embryonic state, a future state. At this time we are in the simultaneous process of construction and destruction. All these things the YCL is doing are towards construction. At the same time we are going to destroy the old state power. This is the dialectic of construction and destruction. Still, overall, the principal aspect is destruction of the old state power and the secondary aspect is construction of the new state power.

WPRM: Given the unrest in the Terai and the killings of some YCL members there, how is this situation developing?

Com. Sonam: Previously in the Terai the national aspect dominated and the class aspect was not that strong. That’s why there were some activities against the YCL, including the killing of some activists. Nowadays this contradiction is changing. The national aspect is going to be secondary and the class aspect is becoming principle. We are mobilising the YCL in those areas based on the party’s line and our activities are developing in those areas. Organisationally we are the principal force in the Terai. Previously, other parties did not have bad intentions to the masses, but some people who had an interest to cause instability in the Terai were supported by some people. But when we exposed the basis of these foreign-related activists, the people were basically clear and the overall situation is now in our favour.

WPRM: What is the relationship between the YCL and the People’s Liberation Army (PLA)?

Com. Sonam: Before the initiation of the People’s War (PW), there was already a YCL, which was transformed into the PLA during the war. During the PW, youth were always organized in the PLA. In local levels there were also local defence teams. After the CPA the main force of the PLA was put in cantonments, but the secondary force, the village and local defence teams, became the YCL. The YCL is now carrying out activities to advance the party line and help the coming insurrection take place. During the PW, the PLA was working as the main force of mobile war. Now the YCL is working to defend the achievements of the PW period and preparing for the coming struggles.

WPRM: Does the YCL also engage in theoretical work?
Com. Sonam: Our main work of ideology is the study of Marxism and the analysis of society on the basis of that outlook. We have been working with the masses based on this ideology and the YCL is working to produce revolutionary successors. Its main role is to assist the party, so it is not involved only in practical work. It is a communist organisation based on MLM. We study this as one of our main tasks, because we are a dynamic force to change society.

WPRM: Have you any message for comrades in the International Communist Movement (ICM)?
Com. Sonam: The ICM is in crisis now. Maoists are the most forward-looking people in the world. We have been able to develop a theory of the whole world, but we have not been able to develop an axis to change it. Firstly, we have to analyse it, and then take the responsibility to change it. Imperialism has been able to do this, but we haven’t. We have done many things, but we have not been able to create an axis to change the world. US imperialism is making plans in the US about how to change the political situation in Nepal. But we proletarians are not doing enough to expose imperialist intervention. We have become disunited. We must create a new unity, and a new unity of youth. For this we must develop programmes in a decentralised way and carry these out wherever possible. There are two aspects here: one is to learn from each other’s revolutions, all the positive and negative aspects, secondly, we must defend each other’s revolutions. With respect to these two aspects, the ICM has been involved in analysing the line struggles of different parties internally, but not helping each other practically. This is a real lack.

There is a need to organise a new International and an International for youth. Theoretically the Revolutionary Internationalist Movement (RIM) has played a good role, but practically it has not been able to develop programs and plans to influence the situation. Now there is an urgent need to think about these questions, and if we fail it will be difficult to build support for revolutions around the world. So we are thinking about how we can play a role to organise internationally, and organise youth internationally. One way could be for youth from Nepal to go to other countries, and another could be for youth from other countries to come here and work in practice and struggle in theoretical discussion with the YCL. For this two organisations are needed, one for Maoist youth and one to bring together anti-imperialist youth. If we fail in this, people will analyse for years to come the reasons for the failure of the Nepalese revolution. But if we take this up, Nepal can be a base area for revolution all over the world.
Posted by nickglais on 9/13/2009 12:01:00 PM