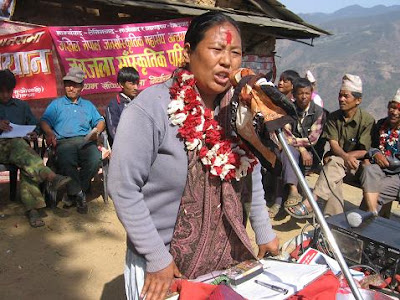 Activists from both WPRM Britain and Ireland, were invited to meet and interview Comrade Jayapuri of the All-Nepal Women’s Association (Revolutionary) in Kathmandu recently.

The new Maoist headquarters sits on a hill overlooking the city and can be reached via a muddy pathway. Approaching the front door, there are obvious signs of work going on in different parts of the building and the noise from these continued throughout the time that we spent there.

Comrade Jayapuri is, like many of the high-ranking UCPN(M) members that we met, a down to earth friendly woman whose long service to the revolutionary struggle and sophisticated political knowledge does not cause her to be anything other than approachable. Speaking through Comrade Suresh Ale Magar, who kindly acted as interpreter, Comrade Jayapuri gave an outline not just of the situation with regard to women in the emerging Nepal, but also her own insights into the current nationwide situation.

WPRM: What is the agenda of the UCPN(M) on women’s issues in Nepal today?
Com. Jayapuri: The party is presently involved in writing a new constitution for Nepal. We are working to write a constitution that will guarantee the rights of women, particularly women from oppressed areas. We are fighting for inclusive and proportional representation for women, for economic and social rights and equality for women. At present we are fighting against the presidential coup and military supremacy and for civil supremacy, alongside all democratic and civil society forces, revolutionary and republican forces. We are also fighting for the national sovereignty of Nepal. Our party has been raising the issue of the unconstitutional step of the president. We are fighting to discuss this issue in the Constituent Assembly. Now there is 30% representation for women in state mechanisms but we are fighting for 50%. In the 601 member Constituent Assembly there are only 179 women members but from our party alone there are 79 women in the Constituent Assembly, the largest proportion by far.

WPRM: What part do women play in the People’s Liberation Army (PLA), Young Communist League (YCL) and UCPN(M)?
Com. Jayapuri: In the great People’s War women played a highly significant role. They fought valiantly and made up 40% of the PLA at that time. Apart from fighting, women also played a role in intelligence and other areas. After the peace process the PLA are in the cantonments but women still play an important role. In the YCL, women are in leading positions, including the vice-president of the Central Committee of the YCL. As there is no war, women cadres in the YCL are working for social transformation, educating people, giving training and making plans for various programs. Women are very active in the YCL. Women are politically and ideologically quite strong, but maybe they are not so active now as they were in the People’s War as this is a transitional period. Of the 175 Central Committee members 37 are still to be nominated. Out of these 138 only 12 are women. This number is far from sufficient for us. The party has been attempting to increase the number of women in the central leadership. At the moment we are saying the issue of women’s liberation will not be accomplished until after the revolution.

WPRM: How is the party trying to increase the number of women in the central leadership?
Com. Jayapuri: In the past the party has made concrete plans to increase the number of women in the central leadership. But these days it has not been making concrete efforts on this question, mainly because of the peace process. The leadership has to now engage in many works which we may not like. Of course the party has placed more emphasis on taking the shackles from the oppressed class, oppressed nationalities, oppressed castes and the oppressed gender.. But we must admit that the party has not managed something concrete as in the past to bring women into the central leadership. It is a sad fact that some women whole-timer comrades have returned home, but not in a big number. We think this is a very negative thing, but our organisation A-NWO(R) has made a special plan for the protection and promotion of women cadres so they remain here in the party working still as whole-timers.

WPRM: Internationally and historically what are the primary influences on women in the Nepali revolution?
Com. Jayapuri: We know that women’s liberation is one part of the whole class liberation. If the whole class is not liberated, women alone cannot be liberated. Of course we have been influenced and inspired by the struggles taking place all over the world, but especially in Russia and China. Comrade Li Onesto from the RCP-USA inspired our women when she came here, and women who took part in the International Road Brigade also inspired us. With this in mind, we ourselves are conducting our struggles and we will continue to move forward. We have been inspired by struggles all over the world but we are making revolution in the specific conditions of Nepal.. Though we have not succeeded completely we think we have been successful until now. We have firstly educated the women of Nepal about class ideology, our aims and objectives, and we also participated in their practical life, working in the fields and carrying out domestic tasks. This is how we became successful in rallying women around the party and participating in the People’s War.

WPRM: There is a tendency within the women’s movement in capitalist countries that if more women were in top jobs the situation would be better, there would be less war and the economic crisis would not have been so severe. What do you think of this?
Com.. Jayapuri: Gender liberation is not possible until class liberation. It is true that women’s participation should increase everywhere but this is only secondary to the class struggle. It is a secondary aspect to say that with women leaders there would be no war. Class contradiction is the principal contradiction. Where there are classes there are contradictions. It is correct that women’s leadership in every party and organisation should be increased but I don’t agree with the view that women leadership would mean no war. Look at Sri Lanka, there have been women leaders but the war has been fierce. So the principal aspect is class and we must concentrate on the class struggle and class ideology. Also there are some who demand a female-only state. This is an extremist view. For us, we demand an egalitarian society where men and women are equal. Unless both men and women struggle for this new society, women’s liberation is not possible. Nepal is a semi-feudal, semi-capitalist country and women have lagged far behind men. In capitalist countries women are more advanced within society. But still to create a state without men is wrong. Here in Nepal we have been struggling alongside men fighting for women’s liberation. Only in this way can we achieve our goals.

WPRM: How is the UCPN(M) practicing two-line struggle at this time, such as the lines of Comrades Prachanda and Kiran?
Com. Jayapuri: In any Communist Party two-line struggle is a must, this is what energises and takes forward the party. In our party also, two-line struggle is natural. In the past there was struggle, and struggle still exists. But these struggles are practiced in a very healthy way, in a friendly way and cordial manner. Every idea and every line is always welcomed. In the context of our party it is important to remember that all the Central Committee members are greatly worried about how to accomplish the Nepali revolution. So even if there are various lines, particularly in regards to tactics, these lines all aim for the accomplishment of the Nepali revolution. In the recent Central Committee meeting we managed the two-line struggle well. Now this struggle has ended, but of course a new one will emerge. We are very proud to say we ended this meeting more united than before and are moving forward with great determination that we will be able to accomplish the revolution in Nepal. Now there is no Prachanda line and no Kiran line, in the future maybe they will again emerge, but now we have unity.