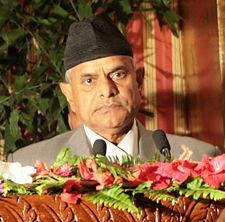 Emerging from the nearly hour long meeting, Dahal told mediapersons that they discussed past disagreements that led to the fall of the Maoist-led government and way to end the current political deadlock.

He said during the meeting President Yadav expressed serious concern over the growing rift among the political parties that has created the current political deadlock.

"The president said that the current deadlock might adversely affect the constitution writing and the peace process," said Chairman Dahal, who is more popular by his nom-de-guerre Prachanda.

"But just by meeting the President the political situation won't improve. This is a good beginning towards ending the [political] deadlock."

The meeting is specially significant as it has taken place at a time when the top three political parties - Unified CPN (Maoist), NC, UML - have been holding several rounds of dialogues in a bid to end the continued House obstruction by the main opposition Unified CPN (Maoists).

This is the first meeting between the two since Dahal resigned from the post of prime minister following differences with President Yadav, who reversed the Maoist government's decision to sack the then Army chief Rookmangud Katawal.

After stepping down from the government, the Maoists intensified their struggle, as what they call it, both from the streets and the parliament, to protest the president's move.

The former rebel party have continued their obstruction of the House proceedings for over a month now and have also intensified nationwide agitation for what they call civilian supremacy.

They have also been boycotting the public programmes attended by President Yadav, Prime Minister Madhav Kumar Nepal, government ministers and other dignitaries, even displaying black flags and pelting stones to disrupt them sometimes
SOURCE; nepal news
Posted by nickglais on 9/30/2009 01:05:00 PM