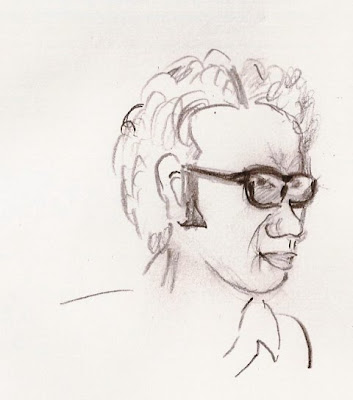 Kobad Ghandy, member of the politburo of the CPI (Maoist) was arrested at Bhikaji Kama Place, New Delhi. He had come to Delhi for treatment. Anuradha, his wife and a staunch member of the party died of Cerebral Malaria in April last year. Anuradha was the sister of the famous theatre personality Sunil Shanbag.

Kobad Ghandy studied at the Doon School and St. Xavier's College in Bombay.
He later went to London to complete his Chartered Accountancy. From 1975 – 1977 he started a Human Rights Group, Committee for Protection of Democratic Rights in Mumbai. The late seventies and early eighties showed Kobad’s inclination towards communism.

Kobad came from a well off Parsee family of Worli, Mumbai. Sometimes during the eighties he married Anuradha, an academic and an activist who shared the same feelings about the exploitation of India’s landless with him.

They left their comfortable abode, the sprawling house in Worli and immersed themselves in the tribal politics of Nagpur. It is strange that the RSS with its head quarters in Nagpur hardly made any attempt to better the lives of the landless and the tribals of Nagpur.

Kobad was affected deeply by the inequality in India, the great divide between haves and have-nots. He later shifted to Chattisgarh where he and his wife devoted in starting mobile Gramin Schools in the most inaccessible areas of Chattisgarh. He is the intellectual face of a communist movement which remains ununited in the face varying adversities.

Kobad is unlike Charu Mazumdar, Kanu Sanyal or even Vinod Mishra who were embedded to the extent of ordering the party cadres to strike against capitalists. If Kobad is involved in so called ‘revolutionary activity’ he would have stayed ‘underground’. But instead he roamed around the capital freely without any bodyguards.

When asked about Naxalites and their armed struggle, he laughed, ‘there is no armed struggle, only protection of our villages with vintage rifles from the corrupt police force. Some of the political groups in Uttar Pradesh and Bihar have arms that even the Indian army don’t have’.

Cases registered against him in Nagpur and Chandrapur are only due to his calling the tribals to resist against landlords and police forces.

Till the poorest of the poor in India whose rice would be snatched even before they eat, who would die of many long hungers, whose disease infested body would crawl out of a hut only once to share the last sun, people like Kobad Ghandy would forever be there.
Thanks to Amitabh Mitra for this article
Posted by nickglais on 9/27/2009 10:55:00 AM